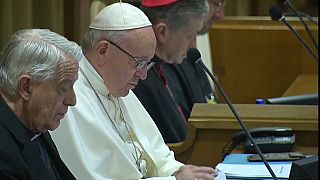 Speaking at a four day summit at the Vatican he said "the cry of the little ones seeking justice" had to be heard.

He's under pressure to provide leadership and generate workables solutions after details of sexual abuse emerged across the world - with the Church accused of covering up crimes.

Pope Francis will be joined by bishops from around the world, Vatican officials, and heads of male and female religious orders.

Survivors of abuse are calling for greater transparency and accountability over past abuse, and for a zero tolerance policy to be adopted.

It is an attempt by the 1.3 billion-member Catholic Church to eliminate a problem that has plagued the organisation for decades.

Church leaders have repeatedly come under fire for their handling of the crisis - often moving priests accused of abuse from parish to parish, instead of turning them over to secular authorities.

On the eve of the summit, ten survivors of sexual abuse by Catholic clergy members met with five Vatican officials to share their views on how the issue should be tackled.

Some expressed disappointment that the Pope himself did not attend the meeting - although he was never scheduled to be there.

One of the survivors who met with the officials was Phil Saviano.

He helped the team of 'spotlight' journalists at the Boston Globe uncover the systemic cover up of child abuse in the Church in the US.

The story of the Globe's investigation was turned into an Oscar-winning film in 2015.

Saviano said although some survivors were "very disappointed" that the Pope did not attend, they were "assured that he will be brought up to speed on the contents of the meeting".

Pope Francis announced the conference in September 2018, following talks with his closest advisors.

The Pontiff said he hopes it will be a "catechesis", meaning that he wants it to be a learning experience for those who attend.

The summit is due to end on Sunday 24th February.

Watch our interview with Zenit's Vatican correspondent Deborah Lubov in the video player above.