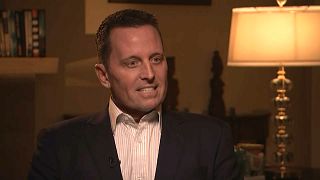 US Ambassador to Germany launches initiative to end criminalisation of homosexuality

The US Ambassador to Germany, Ric Grenell, has launched a pan-European initiative to put an end to the criminalisation of homosexuality in the world.

Grenell, the highest-profile openly gay member of the Trump administration, met with LGBT activists from nine countries, saying the experience of groups in Europe, where homosexuality is legal, made them ideally placed to lead a global campaign.

“Well they’ve taken this step in many of these countries, or all of these countries to decriminalise homosexuality”, Grenell told NBC’s Josh Lederman. “They’re stepping up now to say it’s time for us to take this fight beyond our borders to go to those 71 countries where it is a crime and so I applaud all of these activists who are taking on a new task, a new fight, and there’s no-one better to do this than the European activists who’ve been in this fight from the beginning.”

He said aid may be withheld from countries that do still criminalise homosexuality.

Grenell was a controversial appointment as Ambassador in Berlin, and Lederman told Good Morning Europe that the move could in part motivated by a desire to build bridges with Europe.