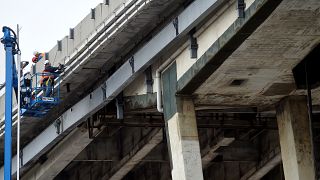 Demolition work has begun on the Morandi bridge in Genoa in Northern Italy, 6 months after it collapsed.

The motorway bridge gave way in August of last year, killing 43 people and forcing hundreds of others to leave their homes.

Over 500 people who were forced to leave their homes following the disaster in Genoa still don’t know if they will ever be allowed to return home.

Anna Rita Certo was one of them and was living below the bridge before its collapse.

She told Euronews how her life has been affected by events.

“You have a new conception of time because time has been so relevant. For example, the few moments you have to get your belongings because you need to be quick and time as well because you don’t want to lose any more moments… We are about six hundred people who cannot enter any more in their house.”

Living under the bridge since the 1960’s, Certo said: “When I was a child it was like a game. You have this bridge built right under your nose and every day you can track all the progress… but at the same time in that period we don’t have the environmental awareness that we have now and you start to see it later as a menace…”

Certo says that ongoing maintenance work on the bridge over the past two years has meant she has been kept up at night and she continually looked to Autostrade for help.

Since the first day the bridge collapsed, she said, she has been aware that she can no longer return to her home.