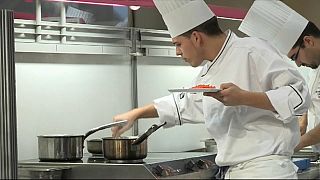 The 2019 Bocuse d'Or is under way in the French city of Lyon, with chefs representing 24 countries battling for top prizes across two days.

One of the world's most prestigious cooking competitions, the event was named after world-renowned French chef Paul Bocuse, who died a year ago.

This year, Bocuse d’Or pays tribute to him and Joël Robuchon, who was the first and latest Honorary President of the Bocuse d’Or.

The idea behind the competition is to bring together promising young chefs from all over the world and have them prepare dishes under five hours, 35 minutes.

"My father always tried to put the young generation in the spotlight so this is what it's all about: discovering new chefs, it's all about the future generation, about transmitting our knowledge, and that's what my father was trying to achieve," said Jérôme Bocuse, French chef and son of Paul Bocuse.

The competition is streamed live on the Bocuse d'Or website and the contestants also bring their own supporters to make up the 6,000- strong crowd.