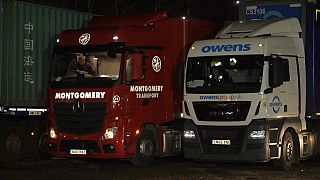 Just off the M25 motorway, which encircles London, truck driver Tim gets ready to settle down for the night. He drives all over Europe, a crucial cog in Britain's supply chain.

Despite fears of a no-deal Brexit bringing chaos to his industry, it's not something he worries about.

"If we crash out with no deal, the European community and things like that, they'll quickly want to sort the problems out that come with that, because it affects them as much as it does us. That's the important thing to remember.” Tim Drury, British trucker said.

"What's interesting speaking to drivers at this busy truck stop, where up to 150 bed down every night is that while for many, their jobs take them right across Europe, there's some really strong support for Brexit - regardless of whether that comes with a deal or no deal,” Damon Embling, Euronews correspondent said.

"But in the wider supply industry, there is a worry that extra border checks could delay trucks, could delay deliveries - and hit business hard, if Britain crashes out of the EU," Embling added.

Take Britain's automotive industry, for instance - most UK-produced cars are exported, the majority going to the European Union. And Britain imports millions of pounds worth of parts every day, from the EU, to help make sucsgh vehicles.

The UK government says a no-deal Brexit is 'unlikely' - and is taking steps to ensure minimal disruption no matter what the outcome. That includes ploughing millions of pounds into extra ferry capacity.