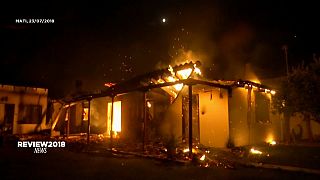 The family of a man killed in a fire in Greece submitted a lawsuit against the state for emotional distress damages.

The case claims there was "criminal lack of activation" from Greek state of the Region of Attica and the Municipality of Marathonas.

The unnamed victim, 70, died as he tried to escape a blaze that destroyed the village of Neos Voutzas in Eastern Attica last summer.

Antonis Foussas, the family's lawyer, said the state did not efficiently deploy forces when the fire "first appeared" in mountains near the village.

The result was that the blaze spread and destroyed a wider area, Foussas added.

''There were a lot of ommissions that day, the laws were not implemented, they wrongly transferred fire service powers from eastern Attica to another area outside of Athens (Kinetta)," said Foussas.

The law firm involved warned another 20 lawsuits will be filed in the next two months, on behalf of families of other victims.

Criminal charges are expected to be filed after January 15, when the initial investigation concludes.

The deadly fire killed 100 victims on July 23, 2018 and destroyed thousands of buildings in areas to the east of Athens.