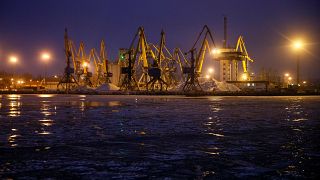 Shipments from the Azov sea have resumed in Ukraine after Russia decided to partially unblock two critical Ukrainian ports — Mariupol and Berdyansk.

The shipments had stopped after Russia seized three Ukrainian vessels and their sailors on November 25 in the Kerch Strait — which links Azov with the Black Sea — accusing them of illegally entering its territorial waters.

“After the situation was escalating there for some week or more, there was a complete stop. But now, the situation is changed and we see that ships are going through the channel,” explained Raivis Veckagans, CEO of the Ukrainian Sea Ports Authority.

“On an everyday basis, let’s say four to five ships are handled by the port of Berdyansk and more than 10 in the port of Mariupol, so we hope to get back to this figure again,” Veckagans added.

However, with relations still strained, Ukraine wants to see a lasting solution.

“We are trying to be efficient and confident for the long-run because the infrastructure, the business relating to the ports, is a long-term business and we need to deal with confidence for the investors, for shippers to use ports,” Veckagans said.

Beyond the ports, the current tensions create uncertainty for Ukraine’s wider economy.

Investors will also have their eyes on the upcoming presidential election in March, wondering what shift in politics and policy that could bring.

“When we’re now talking with foreign investors, they have big concerns with the political situation. Huge political worries because elections are coming in a few months,” Sergii Fursa, a bond dealer with a Ukrainian investment company said.