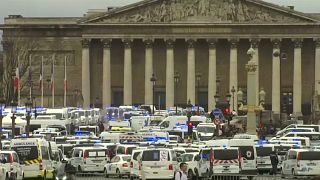 French ambulance drivers staged a surprise protest that began in the early hours of Monday morning against social security reforms they say would compromise some ambulance companies.

Wails of sirens echoed in the city as dozens of ambulance trucks formed a blockade from Place de la Concorde square across the bridge to the French National Assembly.

This could prompt hospitals to opt for less expensive providers, a change that would favour bigger companies and hurt smaller ones that cannot compete in a price war, some ambulance providers say.

The changes in the ambulance options are part of a raft of reforms by French President Emmanuel Macron, which includes an overhaul of the country's highly praised but financially struggling healthcare system.