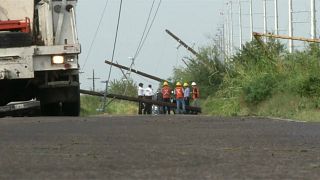 Tropical storm Willa hit the northwestern state of Sinaloa late Tuesday as one of the strongest storms to lash the coast in recent years, with winds of up to 195-kilometres per hour.

Residents took to the streets to pick up debris, while emergency crews poured into work on reestablishing basic services.

No deaths have been reported as thousands of people were evacuated from coastal towns and resorts before the storm hit.

Willa struck the coast about 80-kilometres south of Mazatlan, a major city and tourist resort in Sinaloa, as a Category 3 hurricane on the five-step Saffir-Simpson scale.

The storm reached rare Category 5 status on Monday, with winds nearing 160-260 km/h, as it headed toward the coast.