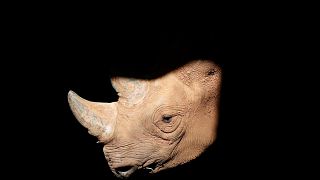 Pangolins, elephants, rhinos — they may live far from the UK, but in London today they're the centre of conversation. A two day international conference on the illegal wildlife trade hosted by the UK government is kicking off.

Last night both British Princes William and Harry were out in support of the cause at a reception in St James' Palace.

"This is a global summit, because the urgent challenge of illegal wildlife trade is one we face as a global community," said Prince William.

"This crime continues to hamper sustainable development, undermine the rule of law, and deprive local communities of some of their most valuable natural resources. And of course it threatens some of the world's most iconic species with a very real prospect of extinction from the wild. Action is required now. It is only by putting together across charities, industries and government agencies as well as across borders and continents that we will truly succeed ending this senseless crime."

The conference is intended to be a step towards reducing the illegal wildlife trade and saving species like elephants from extinction.

Will Foster-Grundy, a Borneo wildlife filmmaker, said the conference is a step in the right direction.

"I think it's brilliant that this is being brought to the forefront of global discussions." he told Good Morning Europe on Thursday.

"This wildlife trade has grown rapidly in the last ten years, but very little has been actively done to try and reduce it. So I think it's brilliant that it's being discussed, but as long as those discussions don't focus exclusively on new sanctions, or increased fines, or legislation of that sort. I think the focus must be on how to reduce the demand for these products. Because by reducing the demand for illegal wildlife, be it in body parts used for traditional medicine or live animals used in the pet trade. By reducing that demand, you really do reduce the problem entirely and there's no need to increase jail times or fines for the people caught up in it."