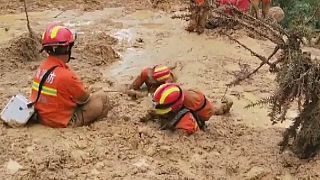 Thousands of rescuers are searching for 15 people who remain missing after a flood and a mudslide hit a town in southwest China's Yunnan Province on Sunday.

They also forced the evacuation of more than 1,500 residents, according to the local rescue headquarters.