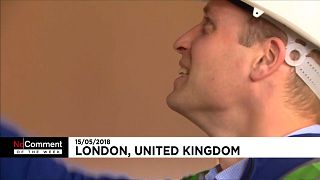 From the controversial opening of the US embassy in Jerusalem to Britain's Prince William painting for Grenfell, here is our No Comment review of the week.

Russian President Vladimir Putin marked the official opening of a 19km-long bridge connecting mainland Russia with the Crimean Peninsula by driving a truck over it.

The opening ceremony for Washington's controversial embassy move to Jerusalem was attended by President Trump's daughter Ivanka and her husband Jared Kushner, both special advisers to the White House. The event prompted clashes between Israeli border police forces and Palestinian protesters near Jerusalem's Damascus Gate on Tuesday.

Britain's Prince William rolled up his sleeves to help paint a wall in a new boxing club being rebuilt after the Grenfell Tower block fire in west London last summer.

Hawaii's Kilauea volcano spewed ash nearly six miles (9 km) into the sky on Thursday (May 18) and scientists warned this could be the first in a string of more violent explosive eruptions, with the next possibly occurring within hours.