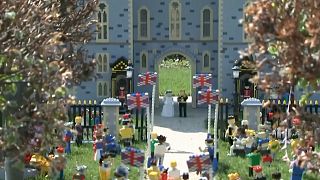 Built specially for the occasion, the replica Windsor Castle is made up of 39,960 Lego bricks.

Despite being situated just three miles (five kilometres) from the real castle, it's the first time Windsor Castle has been added to the resort's Miniland attraction.