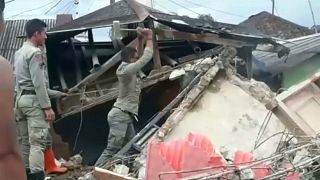 An earthquake that struck the island of Java, Indonesia, on Tuesday, (January 23), left more than 300 properties destroyed.

The quake struck at 13:34 local time with the epicentre located 81 km southwest of Lebak, in Banten province, and at a depth of 10 km under the seabed.

In Bogor, a city 135 km away from the epicentre of the quake, dozens of houses were heavily damaged or had even collapsed.

Indonesia sits on the geologically active Pacific Ring of Fire and is regularly hit by earthquakes. In 2004, the Indian Ocean tsunami killed 226,000 people in 13 countries, including more than 120,000 in Indonesia.