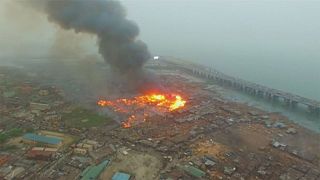 A fire has ripped through a local suburb in Nigeria’s commercial capital Lagos.

Dozens of ramshackle homes were destroyed in the blaze which is said to have begun in the early hours of Tuesday morning. There were no reported casualties.

The Ebute Metta community – located along the Lagos lagoon – is home to a number of sawmills which process timber from all over Nigeria.

Residents say the fire was caused by a power surge.

Lagos is the commercial hub of Africa’s second biggest economy and is home to an estimated 21 million people.