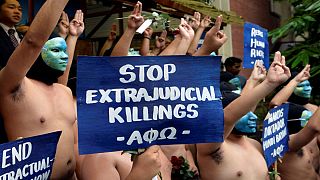 Updated: 25/11/2016
<p>Dozens of men from a university fraternity in the Philippines took part in a naked run on November 25 to protest against the burial of a late dictator at the Heroes’ Cemetery.</p> <p>Ferdinand Marcos, who ruled the Philippines for nearly two decades with an iron fist, was buried last Friday (November 18), drawing condemnation from left-wing groups and human rights activists attributing countless human rights violations and corruption to the former president.</p> <p>Men from the Alpha Phi Omega fraternity ran naked while wearing masks and carried placards in the spirit of celebrating academic freedom. The naked run is an annual event. Each year the fraternity highlights a particular cause.</p> <p>The tradition started in the late 1970s, when members of the fraternity ran naked on the campus grounds in protest after Marcos banned a film criticising his administration.</p>
no comment