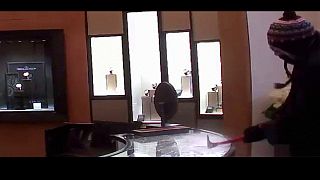 Police in New York have released surveillance video of an armed robbery which took place at a luxury watch store in the city.

The footage showed two men entering shop, with one pulling out a gun while the other smashed glass cases and grabbed watches.

Police say the men stole five watches worth more than $300,000, equivalent to around 282,000 euros, as they ordered employees to lie on the floor. No one was injured in the robbery.