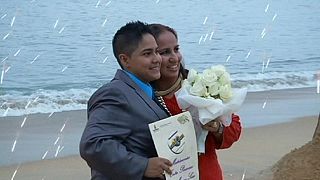 Twenty gay couples took part in a mass wedding on a beach on Friday in the Mexican resort city of Acapulco.

The governor of Guerrero state, Rogelio Ortega Martinez, attended the ceremony and served as the “honorary witness”. In June, Mexico’s Supreme Court ruled it unconstitutional for Mexican states to ban same-sex marriages. However, the court’s ruling does not invalidate any state laws, meaning gay couples denied the right to wed would have to turn to the courts individually.