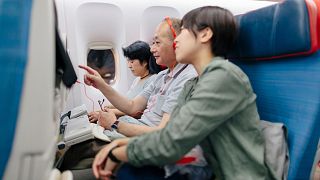 Many travellers have been making up for lost time this year. But as borders open and pandemic fears subside, not everyone is hopping on the next flight.

Some people never plan to travel for leisure again, according to business intelligence agency Morning Consult’s 2022 State of Travel and Hospitality report.

More than 16,000 adults across the Americas, Europe and Asia-Pacific were surveyed for the report. It found that, after experiencing a sharp rise, intent to travel within the next year plummeted in July.

Which nationalities are least likely to travel for leisure?

Respondents from Japan were the most averse to travel, with 35 per cent saying they never plan to take a leisure trip again. South Korea came next, with 15 per cent never planning to travel, followed by China and the US, both with 14 per cent.

Among Europeans, the French were most travel averse, with 10 per cent saying they never plan to travel again. 8 per cent of British and 6 per cent of Spanish respondents said the same.

Why are some people still hesitant to travel?

While COVID-19 is still a health concern for many people, particularly with testing and mask mandates being dropped, there are other factors underpinning the dip in travel.

Economic uncertainty due to months of lockdowns, rising fuel costs after Russia’s invasion of Ukraine, inflation, and fears of recession are all key factors. 43 per cent of Americans say they’re travelling less due to high prices.

Business travel has also taken a huge hit as people continue to communicate online instead of in person. The report predicts the drop in business trips is likely to be permanent, particularly for Europeans.

Spanish respondents were the most likely to say they’re done with business travel for good. Blended business-leisure, or ‘bleisure’, travel is likely to take over this sector.

How are people travelling now?

Travel chaos caused by strikes and staff shortages has also eroded trust in airlines, leading many to hit the road or tracks instead of the skies.

A boom in train travel, propelled by new railway routes emerging across Europe, has also taken custom away from airlines.

This goes hand-in-hand with rising consumer awareness of sustainability - emissions of long distance rail journeys are around 20 times lower than your average commercial flight.