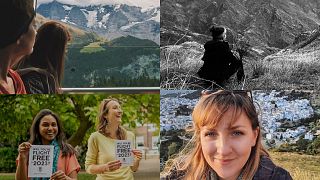 Could you go flight-free?

Millions of people took to the skies this year, as COVID restrictions and testing rules finally eased.

It’s good news for families and friends who were split up by border closures - but it’s bad news for the planet.

An economy class return flight from London to New York emits around 1.48 tonnes of CO2 per passenger, according to this reputable carbon calculator - more than double the average person in Ghana produces in a whole year.

Shunning air travel is the single biggest action an individual can take to reduce their carbon footprint. But if you’re used to flight-hopping, it can feel like an overwhelming commitment.

But people everywhere are managing to do it - and without the sacrifice and FOMO you might imagine.

Euronews Travel has spoken to four seasoned flight-free travellers who have either cut out flying or reduced it completely - and still have amazing travel experiences.

Here’s how you can follow in their carbon free footsteps.

Magdalena Heuwieser is passionate about climate justice in aviation.

In Europe, hopping on a flight feels like the norm. But that’s an illusion - around nine out of every ten people in the world have never been on a plane.

Appalled by this flight inequality, Heuwieser co-founded ‘Stay Grounded’ in 2016.

The network is the umbrella for more than 170 campaigning initiatives around the world.

Have you stopped flying completely?

“I stopped flying in 2014 because I figured that it probably isn't the best thing to do for the climate. I didn't know numbers back then, but it just felt strange to be responsible for so many emissions. I'm lucky to have my family around me - I can reach them within a few hours by train.”

“For some years now I wanted to visit a close friend on the Canary Islands, but without flying there. So this spring, while pregnant, I took a longer break from work (using accumulated over-hours and holidays). It took me four days to get to Gran Canaria by train and ferry. I really enjoyed the journey! I spent three weeks visiting my friend and discovering the island, and then took even more time for my way back, visiting friends along the way in Portugal, Spain and France.”

Travelling means enjoying the journey, not only the destination.

“I'd ask myself twice: Is this really a trip I need to take? Can't I take holidays closer to where I can get to by train? We have so many beautiful spots around... could I take more holidays in a row so that the journey can be accomplished by climate friendly means? Travelling means enjoying the journey, not only the destination.”

Catherine Livesley used to be an ultra-frequent flyer, flying every few weeks for her busy job in the travel sector.

But when COVID hit, she was furloughed - and realised she was completely burnt out.

“It was the break I needed to re-evaluate,” she says.

“Slowing down gave me the chance to see my lifestyle from a new perspective.”

She founded the No Fly Travel Club, an organisation dedicated to fostering sustainable travel.

“More than three short haul return flights a year puts you in the top one per cent of frequent flyers globally, and this already generates around eight per cent of the UK's emissions,” she says.

“To be encouraging more and more travellers into this category seems like madness.”

Have you stopped flying completely?

“For the last 2 years I have pledged not to fly at all, however I've never said I won't ever fly again. This year I'm going to be travelling to South Africa to see family - something I thought long and hard about. However I still won't fly within Europe (where trains can be used instead) and long haul trips will now be a very occasional investment for me every 5 years or so.

I would never judge anyone for flying or create blanket judgements for when it's acceptable to fly. That is an individual decision. I would just hope that people stop to think about what they're doing and why, whether they really *need* that flight or whether there might be an alternative."

“If your company is starting to take sustainability seriously, they may be willing to let you attend events virtually, or to travel by alternative means where possible.

There is also a scheme called Climate Perks where team members can gain two extra days or holiday if they choose a low carbon method of transport.

I would of course recommend people have a look at Noflytravel. There are also classic resources like Man in Seat 61 and Interrail.eu which are always helpful.”

In 2009, the passionate cycling tourist and traveller had two long haul trips booked to China and Tanzania.

Then she watched ‘The Age of Stupid’ - an documentary that questions humanity’s blind destruction of the planet.

“It really affected me. I realised it's actually a lot bigger and a lot worse than I thought. And I need to do a lot more,” she says.

“I cancelled both of my flights, and that was it.”

She’s the founder and director of Flight Free UK. Every year, thousands of people sign the organisation's signature ‘pledge’ and promise to give up flying for a year.

Have you stopped flying completely? Will you fly again?

“I personally will never get on a plane again. The same decision won’t work for everybody, but even if they get halfway there or part of the way there it will make a huge difference.

The IPCC recommends that to meet our decarbonisation goals we should exceed no more than 2.3 tonnes of carbon each, per year. So one flight could use up that entire allowance.

“You don't have to travel far afield to have a genuine travel experience. My adventure of a lifetime was cycling around the coast of Britain. Everything that you travel for - to find yourself, to learn about new cultures, to see new landscapes, to just have a break - I had all of that during that adventure. We’re also incredibly lucky to have Europe right on our doorstep.

“You could take our flight-free pledge not to take a flight for a year. Yes, giving up flying can be hard. It is a sacrifice for some people. But it could be the best resolution you ever make.”

Flight Free UK also offer a ‘free choice’ pledge, which you can customise to your own lifestyle - so you could give up flying for six months, or commit to taking just one flight this year. On the other end of the spectrum, you could pledge to never fly again.

Sunita was flying from a young age. Her parents are from Mauritius, a tiny island nearly 10,000 km - and 12 flying hours - from the UK.

“It’s very beautiful, but there is little option to get there without flying,” she says.

“I was flying from the age of three, then as I got older flying out of my own choice. In my early 20s I was a frequent flyer - though I never thought of myself as a frequent flyer. It’s very easy to think of it as a common activity in the UK.

Then in 2016, she logged her activities in a carbon calculator.

“I was appalled… I made a personal decision not to take more than one flight a year,” she says.

“I was one of those people who was like ‘I’m not sure I can not fly at all’, but that seemed manageable.”

After a while, flying became “less desirable.” As of 2022, Sunita hasn’t flown for four years.

Have you stopped flying completely? Will you fly again?

“I didn’t think I could do four years - but one year is manageable, it’s a short term commitment. Now it’s four years on and I haven’t taken a flight.

“I do have family in Mauritius. And so that is to be honest, for me, the only reason I would get on a plane. Does it mean I'm going be getting on a plane to Mauritius every year? No, of course not. It’s been eight years since I've been back.

“Taking Flight Free UK’s pledge is a really good idea. I think a lot of people are quite apprehensive about it, or hesitant about taking it, and they're not sure they can do it. But they actually tend to be quite pleasantly surprised. There are so many amazing travel opportunities that don’t require flight.

Do you have to go completely flight free?

For some people, going completely flight free isn’t an option. You may have to travel for work, or to visit sick relatives on the other side of the world.

But any reduction in the number of flights that you take is a positive step.