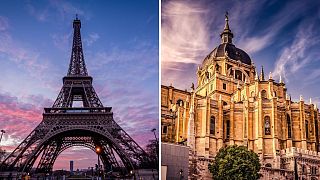 Italy's Trenitalia is set to launch a new high-speed train between Paris and Madrid.   -  Copyright  Canva
By Euronews Travel  •  Updated: 15/12/2022

A new high-speed train could launch between Paris and Madrid by the end of 2024.

The service will be run by Italy's national state-owned railway, Trenitalia - a subsidiary of FS Italiane Group.

The operator plans to connect the two cities with its high-speed Frecciarossa trains, which since December 2021 run between Paris and Milan, and Lyon and Paris, and since November 2022 between Barcelona, Zaragoza and Madrid.

The new train will link Paris and Barcelona, where the existing high-speed service already runs to the Spanish capital.

“We can also think of connecting Madrid with Italy via France,” says the CEO of the FS Italiane Group Luigi Ferraris.

How fast are Trenitalia’s high-speed trains?

Taking an existing route as an example, it takes an average of 9 hours and 40 minutes to travel from Paris to Milan by train, according to Thetrainline. Frecciarossa slashes this to around seven hours, with one-way advance tickets from €29.

What other new train routes can we expect in Europe?

Rail travel is experiencing a revival in Europe as new high-speed and sleeper trains launch across the continent, making travel cheaper, faster and more sustainable.

Czech Railways recently announced it will be reintroducing its former sleeper service between Prague and Zurich via Dresden, Leipzig, Frankfurt and Basel.

Keep an eye on all of Europe’s latest train travel developments for more.