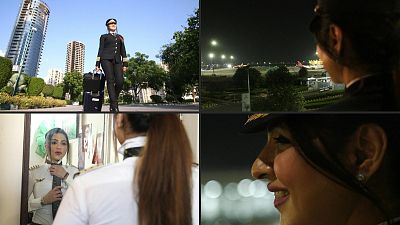 Born in Delhi, India, Zoya Agarwal is a trailblazer in the world of aviation.

She first began flying for AirIndia in 2004. Back then, she was one of just a handful of female pilots.

In 2013, she became the youngest female pilot in India to fly a Boeing-777. And now, India has the highest rate of female air captains in the world.

In India, 12.4 per cent of pilots are women. This figure is over twice the global average. Just 7 per cent of Air France’s pilots are female, whilst at Lufthansa and KLM it’s around 6 per cent.

Despite this comparatively impressive statistic, Zoya is not satisfied. (And nor should she be.)

“I want this percentage to be at 50 per cent, that's when I am going to be happy,” she says.

Though the 40-year-old pilot has enjoyed a long and illustrious career, including piloting an all female crew on India’s longest non-stop commercial flight in 2021, it wasn’t an easy ride to get to this point.

Zoya grew up in a very conservative family, who hoped she would find a husband to take care of her.

"For me, where I came from, I was not even given permission to have such wild thoughts of becoming a pilot,” explains Zoya.

"My mom cried the first time I told her that I wanted to become a pilot. And she said, "Why has God given us a dysfunctional daughter?’”

Despite the lack of encouragement, Zoya’s dream of taking to the skies continued to shine bright.

"I used to think 'Zoya, how will you ever make those dreams of touching the stars and flying jumbo jets come true?'

“But there was this inner voice inside of me, this really strong inner voice which used to say 'Zoya, it's not impossible.'"

Watch the video above to learn more about Zoya.