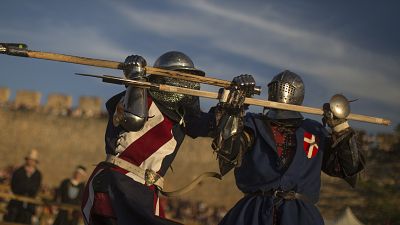 Suited and armoured, a group of athletes in a Toowoomba warehouse in Queensland, Australia are getting ready for battle.

'Historic Medieval Battles' have recently become a popular form of sport in the Darling Downs region.

"We get into a full suit of armour and we have a fight. We fight with a sword and shield or an axe and a shield or whatever you want. On a points-based system similar to a boxing match," explains one competitor, Kyle Weblin.

Athletes train three times a week and insist that the sport is not re-enacting.

"Because it's all-metal, when you do take a hit it will actually smell like someone's been welding, and you can see sparks fly off the armour," says competitor Jacob Dawes.

18-year-old Klay Arnold discovered the sport on social media and is now trying to get the whole family into it.

"Dad loves it, He thinks it's awesome, best thing ever. Mum was a bit sceptical at first but she's starting to get into it. Grandma can't come to watch me, she gets way too scared," he says.

According to Dawes the sport attracts a wide variety of people and is popular with people who do martial arts.

"You see sparks flying off their helmets, swords are bending, helmets are getting dinted," he says.

Ireland's Claregalway castle goes back to the middle ages