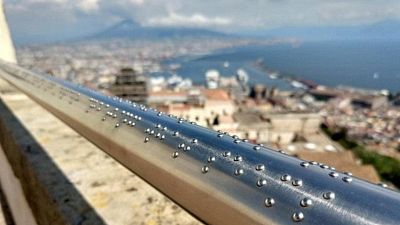 The braille engraved railing at Castel Sant’Elmo with the view of Mount Vesuvius in the background.   -   Copyright  @thegallowboob - Twitter
By Jutalla Coulibaly-Willis  •  Updated: 18/08/2021

This week, a picture of a railing at Castel Sant’Elmo (St Elmo Castle) in Naples went viral.

While traditionally those visiting the hill-top castle have preferred to take photos of the stunning view of Mount Vesuvius and surrounding coast, one visitor noticed something special about the 92 foot long steel rail running along one of the castle’s walls.

The railing, etched with braille in both Italian and English, describes the beautiful view to the visually impaired.

Installed by local artist Paolo Puddu six years ago and inaugurated as a permanent feature at the castle in 2017, the poetic railing allows those who understand braille to read the words of famous Italian author Giuseppe de Lorenzo and picture the view.

Braille readers are encouraged to “follow the shape” as they uncover verses of Lorenzo’s 1947 novel “La terra e l’uomo” (“The Land and the Man”).

Why is accessible tourism important?

Alongside ongoing efforts to make tourism more sustainable, there are also a number of activists fighting to make the industry more accessible.

“People with disabilities have been discriminated against and excluded from many parts of society, especially things that are not essential for life, like leisure,” says Dimitrios Buhalis, professor of Management and Deputy Director of the International Centre for Tourism and Hospitality Research at Bournemouth University.

Author of several books on accessible tourism management, he thinks people need to shift their attitude towards inclusivity. “Many people view it as black or white, accessible or not accessible...in reality, nothing is absolutely accessible to everyone.”

A poetic description of a view can enhance the experience of the visually impaired beyond the necessity of everyday living, which is often limited to braille on things like packaging or signs. Tourists who are blind are entitled to gain the same amount of pleasure from their surroundings as those who have full sight.

Described as “truly wonderful” by people on Twitter, the image of the braille railing at the Castel Sant’Elmo prompted users to share other examples of inclusive design - such as a carving of Botticelli’s The Birth of Venus at the Uffizi in Florence, designed to be touched by those unable to see the painting.

Similarly, this is at the Uffizi Museum in Florence, so the visually impaired can appreciate The Birth Of Venus pic.twitter.com/MTSuIVLjWD

Professor Buhalis says these small interventions are necessary privileges for those with disabilities, “(the railing) is a very low level of intervention, very cost effective, but actually makes a huge difference to people who are either blind or partially sighted”.

Speculation by users on Twitter has suggested that the railing’s artist Paolo Puddu actively decided not to reveal the exact text quoted in braille to those who cannot read it. A concerted effort, some think, to deny those who can already see the stunning view of Naples for themselves.

These small changes may also encourage businesses to cater to a large market of potential visitors often overlooked.

“If you're designing from the beginning with inclusivity in mind it's much more cost-effective than if you need to adapt something you have already designed,” Professor Buhalis says.

We hope these experiences will become more commonplace at tourist destinations across the globe.

Are fake COVID tests being used more than we think?