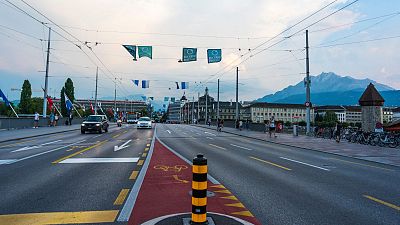 More people are reportedly driving their cars from Geneva to France to take advantage of cheaper fuel.   -   Copyright  Getty/beyhanyazar   -
By Lottie Limb  •  Updated: 24/08/2022

Switzerland has a privileged position at the heart of Europe. Not only do residents have the glorious Swiss Alps and azure lakes to explore, they can easily border hop to other amazing destinations in Austria, France, Germany and Italy.

But travel can also be practical, and a more mundane reason is enticing the Swiss to France this summer.

Given the soaring costs of fuel, an increasing number of Geneva area residents are driving over the French border to fill up their cars.

The phenomenon has been described as ‘pump tourism’, overtaking the ‘shopping tourism’ that has long seen the Genevese buying cheaper goods in border towns.

A litre of fuel in Geneva now costs around 2.20 francs (€2.30) compared to €1.80 in the Haute-Savoie region, so - combined with a favourable exchange rate - the extended journey is worth it to some.

Why are French politicians unhappy about ‘pump tourism’?

Some French politicians aren’t happy about this new tourism trend, however.

They point out that the cheaper pump prices in France are down to the government fuel rebate of 18 cents per litre, which is ultimately funded by French taxpayers.

“We absolutely have to give priority to French people,” Loïc Hervé, a senator from Haute-Savoie, told the Tribune de Genève paper earlier this month.

“We should not be helping out the rich, the Swiss, and foreign tourists. It’s as simple as that.”

But Geneva state councillor Mauro Poggia argues that the border benefits have always flowed both ways. French professionals employed in Geneva have enjoyed the higher salaries and other perks that come from working for a Swiss company.

“And let’s not forget that the French also fill up their cars in Geneva before returning home, and it hasn’t bothered anyone,” he said.

Before Russia’s invasion of Ukraine - and resultant fuel price rises - unleaded gas was cheaper in Switzerland than in France, the Local reports.

But in June the Swiss government decided against the kind of fuel rebate that France, as well as Austria, Germany and Italy have introduced to ease the pressure on motorists.

With France’s rebate increasing to 30 cents per litre in September and October, the flow of vehicles with Vaud and Geneva registration plates is unlikely to stop anytime soon.

Where else is ‘pump tourism’ on the rise?

With the cost of living impinging on people’s lives and travel plans all over the continent, the Swiss-French border isn’t the only one seeing this sort of traffic.

Luxembourg has famously cheap fuel, leading both long-distance truckers and holidaymakers to fill up en route to their final destinations.

The largest petrol station in the world is Shell’s Berchem forecourt, just off the A3 road in southern Luxembourg, and it’s been even busier than usual this summer.

"This is due to the location, which is perfect in the middle of Europe, and the advantageous fuel prices also make a difference," manager Daniel Calderon told AFP earlier this month.