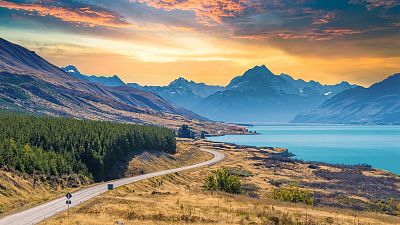 New Zealand is re-opening its borders ahead of schedule, over two years since they first closed to travellers.

From 2 May, vaccinated tourists from the UK, France, Germany, US, and around 60 other countries, will be able to visit without isolating - two months earlier than planned.

Prime Minister Jacinda Ardern’s decision to press ahead with the reopening comes amid New Zealand’s biggest surge in cases since the pandemic began. An omicron outbreak saw infections peak above 20,000 a day earlier this month, now falling to around 14,500 new cases as of 20 March.

But having double-vaccinated 95 per cent of over-12s, the government says it is ready to reconnect with the world.

New Zealand will be ready with open arms.

“We’re ready to welcome the world back,” Ardern said last week. “New Zealand will be ready with open arms.”

“We have now received guidance that it is safe to significantly bring forward the next stage of border reopening work, bringing back our tourists,” she added.

Here’s what you need to know if you’re thinking of booking a trip to New Zealand or Australia in 2022.

Reopening to Australia is the first step

Australia will be the first country to benefit from isolation-free travel to New Zealand, with vaccinated tourists welcome from April 13.

“We are ready to roll out the green and gold carpet to our Australian neighbours, and in time for the school holidays,” said tourism minister Stuart Nash. “We have missed you.”

‘Trans-Tasman travellers’ - referring to those who cross the Tasman Sea between the two countries - represent 40 per cent of New Zealand’s international arrivals, so it’s hoped that the pre-holiday move will be a boon for the nation’s dormant tourism industry.

What are New Zealand’s rules for international tourists?

Vaccinated tourists from New Zealand’s list of visa-waiver countries are allowed back from 2 May. All European countries and territories are on this list, excluding: Albania, Belarus, Bosnia and Herzegovina, Kosovo, Malta, Moldova, Montenegro, North Macedonia and Serbia. Ukraine and Russia are also absent from the full list.

It means that citizens from the UK, France and US, for example, don’t need to apply for a visa before travelling to New Zealand. You must request a NZeTA (New Zealand Electronic Travel Authority) beforehand however, enabling you to visit for up to 3 months - or 6 months, for British citizens.

Tourists will need to take a pre-departure Covid test. Current testing rules stipulate a negative PCR test within 48 hours before departure, or a rapid antigen test no more than 24 hours before embarking for New Zealand.

Those who already have a visa, but are from outside the visa waiver list, will be also eligible to enter the country on 2 May.

What are Australia's Covid travel rules?

Australia reopened its international borders on 21 February, leading to tearful scenes at Arrivals last month as friends and family reunited.

An estimated one million tourists are keen to explore the vast country again this year, but barriers remain.

Travellers must first apply for an ‘eVisitor’ Visa to visit Australia. Covid admin then includes a copy of your vaccination certificate, including boosters, and proof of a negative test in the 24 hours before departure - all uploaded to the Digital Passenger Declaration for Australia.

The Covid test rules differ depending on which state you arrive into. Most require a test on arrival and quarantine until a negative result can be shown. South Australia demands the post-arrival test is a PCR; New South Wales asks for a rapid antigen result as soon as possible; while Tasmania has dropped all restrictions on international travellers.

How easy is it to get a flight to Australia or New Zealand from Europe?

Entry rules are one thing, securing flights are another. Most routes from the UK or EU to the region involve a change in Doha, Hong Kong or Singapore. So there are also travel rules in the intermediate country to take into account.

Changi Airport in Singapore does not require any tests from transit travellers, but most tourists are currently banned from travelling through Hong Kong’s airport. The city announced today (21 March) that it is easing its travel ban on British and French tourists, among others, from 1 April, halving the isolation period from 14 to seven days. It’s not yet clear how this will impact transiting rules.

Russian airspace bans are also impacting some long-haul flight paths, with Australia’s Qantas detouring around the Federation. It’s likely to hike up fuel prices on an already expensive route.