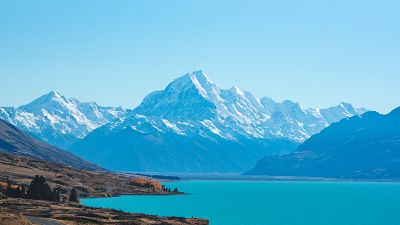 New Zealand’s borders have been closed for almost a year. But how has a country so reliant on tourism managed to stay afloat?

Throughout the COVID-19 pandemic so far, New Zealand has routinely been held up as an example for the rest of the world to learn from. Those of us in Europe have looked on enviously at videos of concerts being held and restaurants open with no social distancing needed.

New Zealand has had fewer than 2,500 cases and just 26 deaths, thanks largely to its stringent border closures and rigorous quarantine process for new arrivals.

Kiwi Prime Minister Jacinda Ardern followed the example set by Taiwan - arguably the nation which has tackled the pandemic most effectively, with just 978 recorded cases (from a population of nearly 24 million). And, much like Taiwan again, New Zealand has relied on boosting domestic travel to save its vital tourism industry.

Tourism is a cornerstone of the New Zealand economy. It is directly responsible for around 18 per cent of the country’s GDP, contributing almost €30 billion each year, while supporting approximately 9 per cent of the workforce. More than 3.9 million visitors from abroad arrive in the country every year, spending almost €40 million every day.

These numbers, pre-pandemic, were expected to continue to rise exponentially, with the sector expected to account for a fifth of New Zealand’s economy within a few years.

All this is to say: tourism is really, really important for New Zealanders.

So when the country’s elimination strategy for COVID-19 relied on border closures, it became a pivotal moment for the travel industry.

“At no time in New Zealand’s history has a power like this been used, and I recognise how extraordinary it is,” Ardern said almost exactly a year ago.

“This is the first time the New Zealand government has advised New Zealanders against travelling anywhere overseas,” commented Winston Peters, then-Foreign Minister for the country.

But in the 12 months since borders were closed, New Zealand has managed to successfully harness the power of its own citizens to keep the travel sector afloat.

A nation of travellers

Despite having a population of fewer than five million people, Kiwis make more than three million trips abroad each year. These numbers are even more impressive when you consider that around €7.55 billion is spent by New Zealanders on this overseas travel.

It’s no surprise that the New Zealand Tourism Board has tried to see some of that money redistributed internally over the last year, by inspiring the country to explore more of their own backyard.

New Zealand Tourism (the national tourism board) has tried to harness that same spirit this time around, launching the #DoSomethingNewNZ campaign.

As part of the project, a report into New Zealanders’ attitudes towards domestic tourism was also commissioned - with interesting findings.

One of the key learnings was that people in New Zealand were aware that the borders being closed presented an “immediate, unique opportunity” to explore their home country “in the absence of international visitors.”

For the first time in recent years, New Zealanders have been able to travel to tourist hotspots like Queenstown, the Coromandel, Hobbiton, Fox and Franz Josef Glaciers, and the other multitude of places without having to battle overseas guests for space.

The report also noted that there was far more of an appetite for short trips and weekends away than for long vacations, largely because of a lack of annual leave. This has been seen as an opportunity to promote regular, short-stay travel - with campaigns pushing multiple destinations, and encouraging New Zealanders to see as much of the country as possible.

During the research, it was also found that people were willing to spend more money than usual while travelling domestically - particularly motivated by a desire to help support local businesses and organisations.

It seems to be working

While there’s no doubt the tourism sector has suffered in New Zealand, the emphasis on domestic travel seems to be having a positive impact. Last October Air New Zealand relaunched its mystery travel packages, a sign which some took to be hopeful.

Importantly, the renewed focus on internal tourism seems to be resonating with people in New Zealand.

We spoke to Robbie Taylor-Hunt, a British-New Zealander who has been living in Wellington throughout the pandemic.

“I think encouraging domestic travel is great,” says Taylor-Hunt, “even outside of COVID restrictions, there's so much to see within Aotearoa [the Māori name for New Zealand] and within our own countries around the world, that we never go to.

“I think domestic tourism is maybe encouraging us to be more creative and flexible with how we travel and the kind of holidays we take.”

Taylor-Hunt also emphasised the environmental benefits of travelling locally, something activists and climate experts alike are keen to promote.

“Domestic tourism also means a lower carbon footprint as it saves on long haul flights or flight at all,” he adds.

Over the last 12 months, Taylor-Hunt has been on multiple trips within the country, in a bid to experience the diversity New Zealand has to offer.

“I went to Mount Ruapehu, and stayed in Ohakune to do some snowboarding, which was great,” he explains. “I got the coach up so it was cheap and straight-forward. I also went up to Northland was so nice, to Keriri and then over to Opononi where we did sandboarding - I loved it!”

Like Taylor-Hunt, Christchurch-based Katarina Gough has also used the last year to explore her home country.

“I’ve always said ‘yeah, yeah I’ll go to the Pancake Rocks or finally visit Milford Sound’, but because they are always there, I’ve forgone trips within New Zealand in favour of travel abroad usually,” Gough says.

“I’ve lived here my whole life, but most overseas tourists will have seen far more of my own country than I ever have - which is ridiculous! I think we take this beautiful country for granted.”

For Gough, this has been a chance to visit - and revisit - places which are normally busy with international visitors.

“It’s great that we have so many people visiting from abroad each year; in fact - it’s vital for us all.

“But it has been amazing getting to go back to Queenstown and just appreciate how beautiful Lake Wakatipu is, without there being a bunch of people on a gap year loudly falling out of a bar next to you,” she jokes.

“It’s strange how some places just become known as being ‘too touristy’ - what does that even mean? I’ve made it my mission to see as many of those places as I can recently, and to be honest it’s made me recognise why people travel thousands of miles to visit. Aotearoa is amazing.”

In places like Israel and the UK where vaccine rollouts have progressed expediently, there is an argument that instead of pushing international travel through vaccine passports, there should be a focus on domestic tourism instead.

With increased debate over the legitimacy, ethics and efficacy of vaccine passport programmes - it could be that internal travel is the best way to kickstart economies safely.

This sentiment is echoed by Taylor-Hunt. “Loads of countries have a huge variety on offer, which most people may never even consider. Countries which are larger than New Zealand may have vastly different environments to explore,” he explains.

“I think there’s so much we never do even in the very towns and cities we live in, because we don’t access these spaces with tourist eyes - but domestic tourism encourages this approach.”

Countries like China and India have already seen the benefit of internal travel, as Chinese airlines and hotels have already begun to recover from the economic fallout of the last year as domestic tourism booms.

Whether or not this approach will be taken in Europe and elsewhere remains to be seen, but as conversations continue about the complexities of vaccine passports - it seems like a renewed focus on domestic travel could be a major win for our economies.

Travel between Australia and New Zealand allowed from April 19

Will the COVID-19 crisis be a long-term boost for domestic travel?