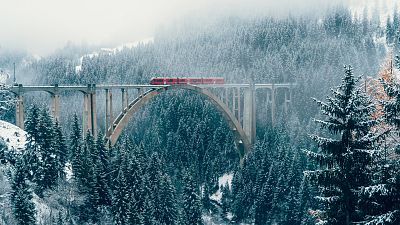 With a rail network that spans hundreds of thousands of kilometres, Europe is one of the world’s most diverse and accessible train travel destinations. From five-star luxury sleepers in Spain to 100-year-old rail routes in Slovenia, we pick the continent’s most spectacular train journeys for your next European rail adventure.

The ultra-luxurious Transcantabrico sleeper train takes guests on an 8-day journey from Spain’s historic Santiago de Compostela to the Romanesque city of Leon. Travelling through the country’s northern coastal towns of Santander and Bilbao, the 643 km route offers views of the Cantabrian Sea and the green peaks of Asturias, as well as the opportunity to explore the Picos de Europa National Park and the beaches of Ribadeo. Naturally, the route also celebrates Northern Spain’s world-class food and wine, stopping off at some of the region’s best seafood restaurants and serving Michelin-worthy a-la-carte menus onboard. Inside the train, 1923 Pullman coaches redesigned with luxurious suites, jacuzzi ensuite bathrooms, and vintage dining cars await.

For more information and how to book, visit Renfe.com

Crossing the Hardangervidda National Park at 1,237 metres, the Bergen Railway is northern Europe’s highest mainline railway line. The 371 km route begins in Oslo, travelling through green lowlands and indigo-coloured lakes and then climbing past glass-like fjords, forested rivers, and snow-capped mountain passes. The journey from Oslo to Bergen, which burrows through 180 tunnels and stops at 22 stations, takes around seven hours, but many visitors combine the route with a ride on Bergen Railway’s branch line, Flåm, Europe’s steepest standard-gauge railway.

For more information and inspiration on other Norwegian rail journeys, see Visit Norway

For history and epic engineering: Bohinj Railway, Slovenia and Italy

The three-hour journey from Jesenice in Slovenia to Trieste in Italy climbs through the snow-capped peaks of the Julian Alps, taking in both the world’s largest stone arch bridge (the main arch alone spans 85 metres) and Slovenia’s longest railway tunnel (6,327 metres). The 100-year-old line was originally built to connect Western Austria and Southern Germany with the then Austro-Hungarian port of Trieste. Today, however, the Bohinj Railway serves cyclists and hikers accessing the region’s beautiful trails and wine enthusiasts exploring Nova Gorica’s wineries. From May to November, a steam train pulls the carriages and staff wear the same uniforms worn during the 1900-1906 Austro-Hungarian Empire.

Switzerland’s most iconic rail journey chugs through a winter wonderland of towering snow-capped peaks, dense alpine forest, and 61 metre-high stone viaducts that rise from deep valley gorges. Reaching average speeds of 38km/hour, it takes seven and a half hours for the Glacier Express to travel from Zermatt to St.Mortiz, giving passengers ample time to take in the Swiss Alp views as they sip on champagne or feast on smoked trout and beef tartare. While many visitors complete the journey in a day, taking it slow means enough time for cross-country skiing in Oberwald or summiting Gornergrat on Europe’s highest cog railway for showstopping views of the Matterhorn.

All aboard the Hogwarts Express. On the West Highland Line in Scotland, you can retrace the journey of the world’s most famous wizard as you glide in the Jacobite steam train over Glenfinnan, the 21-arch viaduct made famous by the Harry Potter films. The five-hour journey winds passengers from the lowland city of Glasgow to the highland port of Mallaig, taking in the 267km of glassy lochs and heather moorland that make up Loch Lomond, Trossachs National Park, and Rannoch Moor. The train passes through some of the wildest parts of the UK, meaning you’re far more likely to spot deer or the occasional soaring eagle than you are another human being.

For rainforests and ancient lakes: Montenegro Express, Montenegro and Serbia

Opened in 1976, the Montenegro Express is one of Europe’s younger long-distance rail routes. But while it may not compete with older rail journeys when it comes to history, the mountain scenery certainly makes up for it. The 12-hour journey begins from Montenegro’s seaport town of Bar and continues through 254 tunnels and 435 bridges through the Dinaric Alps to reach the Serbian capital, Belgrade. In just 475 km, the Montenegro Express takes in the Biogradska Gora National Park (one of Europe’s few remaining rainforests), Lake Skadar (southern Europe’s largest lake), and even dips into parts of Bosnia and Herzegovina. For the best views, make sure you sit on the left side of the train when travelling from Bar to Belgrade.