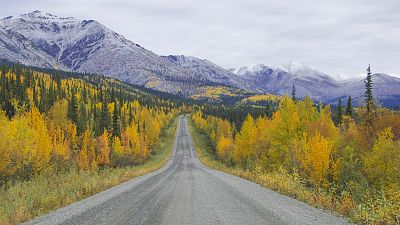 Home to Canada’s highest mountains, the world’s largest non-polar glacier and more moose than people, Yukon is the perfect place for a wild road trip.

Yukon, located in Canada's Northwest Corner and bordering Alaska, is Canada’s smallest territory. It’s roughly the same size as France, yet with only 40,000 inhabitants and close to 80 per cent of the territory made up of untouched wilderness, you can’t find a drive more rugged and beautiful than this.

Why a road trip?

Yukon's highways rank among the world's premiere adventure drives and include the world-famous Alaska Highway, as well as the Top of the World and Klondike Highways. The Dempster Highway is also in Yukon, which is the only public road in Canada that crosses the Arctic Circle.

Secondary roads such as the Silver Trail, Campbell Highway and Canol Roads offer glimpses into some of Yukon's most unique but less visited communities and provide outstanding opportunities for off-road experiences.

What is there to do in Yukon?

In the South West corner of the territory you’ll find the Kluane National Park which is home to the world's largest non-polar glacier ice fields. If you start your road trip here and slowly make your way north, winding across the territory you can explore the history of the gold rushers, canoe along rivers and lakes, trek through the mountains and learn about the First Nations culture and history.

Dawson City is a great stop-off back into society for a bit of history. It was the centre of the Klondike Gold Rush from 1896-99 and it’s now the second largest town in the territory. The only place bigger is Yukon’s capital and only city, White Horse.

From Dawson City you can take the Dempster Highway north through Tombstone Territorial Park. This is where things really get wild as there’s no mobile phone network in the park but it’s a great area for hiking, camping and wildlife.

Thanks to Yukon’s northerly location and low levels of light pollution in winter it’s a great place to see the Aurora Borealis, a.k.a the Northern Lights. In summer the sun barely sets meaning you can explore Yukon’s wilderness under the midnight sun.

Watch the video above to take in Yukon’s incredible wilderness.