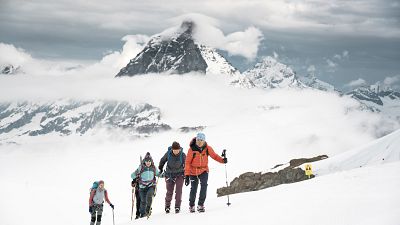 “I have found the love of my life,” declares Zuzana, an enthused Czech who’s come to Switzerland to climb her first 4000-metre peak.

“My husband will be pleased. I will now be doing this all the time!”

Taking in the damp alpine view across Andermatt from the summit of Diavolo, a 500m vertiginous via ferrata, the group are feeling elated. Some have never climbed to such heights, others have dabbled, but life got in the way.

Guiding us up the rung and ladder clad mountain route is Swiss Alpine guide and Mammut ambassador, Caroline North, who has been on expeditions from Pakistan to Antarctica and Patagonia.

She explains that climbing a via ferrata is a good way to practice working in a team as we are roped together and have to adapt to each other’s pace.

North, along with another mountain guide Caroline George, who's from Switzerland, is hosting a camp to introduce participants to the basics of mountaineering. They’re also here to inspire more women to take up the sport, which is still vastly male-dominated.

They’re here to inspire more women to take up the sport, which is still vastly male-dominated.

The ultimate goal over three days is to achieve an all-female ascent of the 4164-meter Breithorn, the perfect peak for those dipping their toes into alpinism. With a cable car running to within 365m of its summit - it’s considered one of the easiest of the Alps’ 82 4000-metre peaks.

The Breithorn climb is part of a wider initiative, the 100 per cent Women Peak Challenge, which calls on all-women teams to climb Switzerland’s highest peaks by October 8th 2021.

July 22nd 2021 marks the 150th anniversary of the first female ascent of the Matterhorn by Lucy Walker. Whilst many have heard of her fellow countryman Edward Whymper, who first scaled the mountain in 1865, they may not have heard of Walker, the daughter of a rich merchant from Liverpool, who was said to be dressed in a cumbersome long flannel skirt when she made it to the top of the 4478-meter peak.

She was said to be dressed in a cumbersome long flannel skirt when she made it to the top of the 4478-meter peak.

Walker was accompanied by her father, her brother and a local guide -- apparently fuelled by a modest diet of champagne and sponge cake.

Over the course of her 21-year career in the Alps, she made 28 successful attempts on peaks over 4,000m and holds the title of the first female ascent for 16 summits.

150 years since Lucy Walker’s ascent, there still remains a gender gap when it comes to taking part in alpinism, and that’s what the 4000m peak challenge seeks to address.

“In 1971 I couldn’t even vote,” says Zermatt’s first female mayor, Romy Biner-Hauser, as she welcomes us to the alpine museum which is holding a special exhibition looking at the role of women in the history of the mountain town.

“When God invented the valleys,” she says, “he was in a good mood and treated us exceptionally well. This is a very beautiful area and a special village - with a history and a reality.”

Biner-Hauser has also climbed the Matterhorn, considered one of the toughest 4000-metre alpine peaks and understands the emotions that come with reaching a summit.

“I had tears in my eyes; the mountain has accompanied me since my childhood. And when I did it again years later, there were still tears,” says the mayor.

Of the Breithorn climb, she says “Next time you can go a little further, a little beyond as it’s another memory you can take.”

I had tears in my eyes; the mountain has accompanied me since my childhood. And when I did it again years later, there were still tears.

As we wander around the exhibition, we are amused by the examples of typical displays demonstrating male dominance its alpinism. Photos of Whymper, and other brave and rugged-looking men and their ‘heroic’ achievements ‘conquering’ mountains.

But the explanations alongside them point out what’s missing: there is no mention of the female pioneers or of the local guides who chose the routes and carried the loads.

Redressing the balance is an interactive project highlighting women's stories in Zermatt, not only the mountaineering women but travellers, and those working on farms and looking after families.

We begin our alpine adventure by taking the Matterhorn Express cable car to the Klein Matterhorn lift station, which at 3833 metres allows direct ascent to the Breithorn summit, on the Swiss-Italian border.

It’s summer, but there has been plenty of fresh snow and we are surrounded by skiers and snowboarders, enjoying descents on the Theodul Glacier.

Instead of starting the climb there, from the Breithorn Plateau, we are to spend the night at the Rifugio Guide del Cervino for the full ‘alpine start’ experience, (a 5 am wake up call).

Joined by a third female guide, Ramona, Caroline and Caro take advantage of the descent along a steep ski slope to the rifugio, to teach crampon techniques for ascending and descending snow, and how to use an ice axe.

Over hot chocolates, we discuss the challenge around women’s participation in mountain sports, before another alpine essential - a huge carbohydrate loaded dinner washed down with a Genepi, a popular herbal alpine aperitif.

George explains how it’s important that a space is created for women to go to the mountains. It wasn’t until 1980 that the Swiss Alpine Club accepted women, “but there’s a very big difference between this and actively being invited to go into the mountains,” she explains.

“You have an open door, but it's hard to cross the door to go into the room, especially when before that you were actively rejected.”

But by seeing so many women into the mountain, “it has a snowball effect because women think, well, she can do it. I can do it, too.”

There is still a long way to go to shift the balance. There are currently just 42 women guides in Switzerland. “That’s two per cent and that is the norm. And in some countries, it's one per cent” she says.

“The motivation behind this,” says George, “is to not feel like deer in the headlights when we go out into the mountains, or to not be asked: ‘where is your (male) guide’ when you see a women’s team.

George warns that “in our lifetime, we will not see this change, so long as it’s still two per cent, people will always take that for granted.”

Onto the challenge itself. We discuss what the hardest part is for those new to alpinism.

“Definitely the altitude,” says George, “but also your thoughts. Just thinking that maybe you can't do it because you're doing something you haven't done before, the unknown. It’s a normal reaction to just think you can't do it, that it’s not for you.

“Doubting yourself is a really big part of not making it to the top.”

“Just believe in yourself and trust that you can do it. Because really it is just hiking at altitude.”

The next morning we rise at 5am, (after very little sleep due to altitude) ready for the ascent.

North advises us to think of a positive word and use it when we feel worried, “like a mantra.”

The morning started out windy so we wrap up warm, but it doesn’t take long to work up a sweat by walking back up the piste, ironically, the steepest part of the ascent.

Roped together to safely cross the glaciated terrain, we eventually reach the Breithorn’s crest and enter some low, cold clouds. No chance of the promised views of the Matterhorn, Rhone Valley and Monte Rosa massifs though.

We walk up the snow slope, slowly, looking out for crevasses and making sure our crampons bite into any icy patches, then, after about four hours after leaving the rifugio, we reach the cloud-shrouded summit.

As the whoops and selfie-taking commence, the wind gives us a gift and blows the clouds away briefly, enabling the Matterhorn to come into view. We try to take photos, but no smartphone really captures the view of the mountain, so up close.

Then George, with a voice of calm amongst the excitement, asks us to, “not let the insta world take over.”

“Take five mins for yourself,” she reassures. “You are giving people a gift by experiencing the mountains through you, but don’t forget - five minutes for yourself.”

As we descend back to the Klein Matterhorn lift for hot chocolates, George reflects on the day. “We did it in a group of women. It’s very special so keep it in our hearts,” she says.

Mountaineers attempting first ever summit of K2 during winter