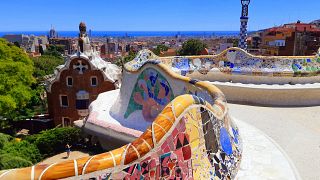 Barcelona’s tourist tax will be increased over the next two years, city authorities have announced.   -   Copyright  D Jonez
By Rebecca Ann Hughes  •  Updated: 09/01/2023

Barcelona’s tourist tax will be increased over the next two years, city authorities have announced.

Since 2012, the visitor hotspot has added an extra fee on top of the region-wide tourist tax.

The city’s surcharge varies depending on the type of visitor accommodation and is only levied on official tourist lodging.

Barcelona is Spain’s most visited city and continues to struggle with overtourism.

How much is Barcelona’s tourist tax?

Visitors to Barcelona have to pay both the regional tourist tax and the city-wide surcharge.

Cruise passengers spending more than 12 hours in the city pay €3 to the region and €1.75 to the city.

How much is Barcelona’s tourist tax in 2023?

Now, city authorities have announced an increase in the municipal surcharge.

This will happen over two years, with the first increment coming into force on 1 April 2023.

Why does Barcelona have a tourist tax?

The city sees an average of 32 million visitors a year, many of whom arrive on cruise ships.

The hike in the tourist tax, which is divided between Barcelona’s Generalitat and the City Council, will also bolster the city’s budget.

“The economic data for tourism in 2019 is already increasing, not in the number of tourists, but in the amount of income from tourism in Barcelona,” deputy mayor Jaume Collboni said.

“It was the objective sought: to contain the number of tourists and increase tourist income because our model is no longer mass tourism but quality tourism, which adds value to the city.”

The council said the proceeds would be used to fund the city’s infrastructure, including improvements to roads, bus services and escalators.

What other Spanish cities have a tourist tax?

Valencia recently announced the introduction of a tourist tax for visitors staying in all types of accommodation in the region, including hotels, hostels, apartments and campsites.

It will come into effect in December 2023.

Depending on the accommodation, travellers will have to pay between 50 cents and €2 per night for up to seven nights.

Authorities say the proceeds will go towards the sustainable development of the region’s tourism sector.

Travellers to Spain’s Balearic islands also have to pay a fee.

The Sustainable Tourist Tax, which applies to Mallorca, Menorca, Ibiza and Formentera, must be paid by holidaymakers aged 16 or over.

In high season, the tax can reach up to €4 per night.