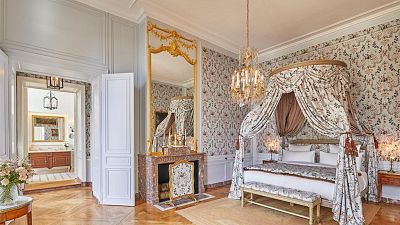 After two years of the pandemic, we all deserve a bit of luxury in our lives.

Despite travel restrictions, new high-end hotels have been opening up the world over. So whether you’re looking for a personal butler, ocean views, or haute cuisine, these resorts are ready to cater to your every desire.

Curated by Luxury Travel Intelligence (LTI), this list gives the lowdown on the most extravagant hotels money can buy (and believe us, you will need a lot of money).

From boutique residences to luxury complexes, these hotels will help you relax, unwind and forget about the outside world. For a while at least.

Perched on the shore of Lake Geneva in Switzerland, the Woodward offers a taste of early 20th century glamour with stunning views over Mont Blanc. Built by French architect François Durel in 1901, the chic property has been transformed by architect Pierre-Yves Rochon and is now the first all-suite hotel in the city.

With prices from €1,532 a night for its deluxe suite, the lavish life doesn’t come cheap here. But with restaurants by the Michelin-Starred L'Atelier de Joël Robuchon and a 1,2000 square-metre Guerlain Spa, you’ll certainly get your money’s worth.

If you really want to splash the cash, a stay in the sleek Mont Blanc suite, with balconies overlooking Lake Geneva and the mountains will set you back a cool €4,309 a night.

A 300-hectare nature sanctuary, made up of forests, beaches and undulating sand dunes, Kisawa sits on the southern tip of Benguerra Island, off the coast of Mozambique.

With strong eco-credentials, including a zero-waste restaurant, the resort has its own marine research facility too.

Despite being so rooted in the local landscape and culture, the sanctuary was actually set up by Princess Nina of Denmark.

With 12 bungalows on offer, each residency is carefully furnished, while some even come with Indian Ocean views.

The site has a massage hut, a wellness centre - offering treatments rooted in Ayurvedic medicine - tennis courts, four dining venues and a water sports facility for exploring the coral reefs which surround the island.

A two-bedroom residence will set you back an eye-watering €12,000 per night for two guests.

A new opening from the Mandarin Oriental Group cements itself into fifth place. Originally opened as the César Ritz in 1910, the building has undergone extensive restoration, to highlight its original iconic style.

With 153 rooms, including 53 suites, the interiors have been decked out by French designers Gilles & Boissier, so expect plush furnishings and king-sized beds.

The hotel is set to become a culinary destination too, with five separate dining concepts all overseen by the three Michelin-starred Chef Quique Dacosta. These include Deessa, an opulent restaurant which celebrates locally-sourced Spanish produce, the Champagne Bar, and the Palm Court, which serves modern classics and afternoon tea in leafy surroundings.

After all that indulgence, you can enjoy some holistic therapies in the Beauty Concept Spa or simply relax in the steam room.

Owned by luxury monolith LVMH - home to Louis Vuitton, Dom Pérignon and Hennessey to name a few - the Cheval Blanc couldn’t be closer to the heart of Paris. A few steps from the Louvre, the hotel occupies the legendary Samaritaine building, which has been re-imagined by architect Peter Marino.

The building houses Paris’ longest swimming pool, as well as a spa run by Dior, which features a hammam, fitness studio and an invigorating snow shower

You’re unlikely to find a more elegant location than this, and the extravagant facilities inside won’t disappoint either. The building houses Paris’ longest swimming pool, as well as a spa run by Dior, which features a hammam, fitness studio and an invigorating snow shower (if you dare).

There are four restaurants and bars here too, so even though you have Paris on your doorstep, you won’t ever need to leave.

There are 7 rooms available, with a deluxe suite starting from €1,250 a night.

A short hop across the Channel, one of the UK’s best country house hotels has come to West London. A boutique venture, the Beaverbrook occupies two Georgian townhouses in Chelsea. Each of its 14 rooms is named after a London theatre, with quirky, colourful furnishings throughout, curated by creative director, Frank Lowe.

A stylish Japanese fine-dining restaurant, complete with sushi bar, provides the entertainment here, alongside Sir Frank’s Bar, a playful homage to Lord Beaverbrook’s London life, where you can sample a Spitfire Collins or a Kinky Boots cocktail.

The deluxe suite comes with a super king-size bed, a complimentary mini bar and an underfloor heated bathroom and will set you back €643 a night.

Once a modest hunting lodge built by Louis XIII, Airelles sits in the grounds of the world renowned Palace of Versailles. Offering out-of-hours palace access, guests can explore the 809 hectares of manicured gardens and walk in the footsteps of Louis XIV.

The chateau has 14 luxuriant rooms and suites, full of period furnishings with a contemporary twist. To give you energy to explore all that Versailles has to offer, breakfast, created by Alain Ducasse himself, as well as a complimentary minibar and daily afternoon Tea, are included in your stay.

For the full royal experience, you’ll have a dedicated butler too, while at dinner time you can head to The Feast by Alain Ducasse for a true royal banquet.

For the full royal experience, you’ll have a dedicated butler too, while at dinner time you can head to The Feast by Alain Ducasse for a true royal banquet.

The Spa Valmont will indulge you with beauty treatments inspired by Marie Antoinette before you take a dip in the pool or retreat to the hammam.

A night in the deluxe suite for two people will set you back €1,500.

Owned by the luxury jewellery brand, the Bulgari Hotel Paris has been designed by Italian architects Antonio Citterio and Patricia Viel.

Located in the city’s high-end ‘golden triangle’ and overlooked by the Eiffel Tower, this intimate hotel has 76 rooms and some spectacular views of Paris. The largest is the Penthouse suite, which spans a luxuriant 1000m² and has two kitchens, its own bar, a hammam and a roof garden.

All the rooms are elegantly designed, with low, intimate lighting, muted colours and opulent fabrics.

Foodies can head to "Il Ristorante - Niko Romito" to experience classic Italian dishes - from antipasti to veal cutlets - all served with a contemporary twist.

The 1300-square metre spa is another highlight here, clad in Italian stone and green onyx, it feels like a traditional Roman bath. There are private treatment rooms available for couples and a 25 metre pool for those morning lengths.

A Junior suite with terrace for two people costs €2,457 a night. Penthouse prices are available on request.

The remaining eight most luxurious hotels featured in the list are: