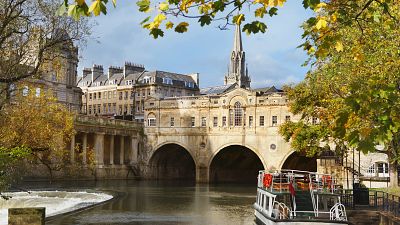 Relaxing is the raison d’être of a holiday. But what exactly creates the right conditions to unwind? It’s different for all of us of course - some might find an active skiing trip is just the ticket, while for others de-stressing means doing as little as possible.

One group of wellness gurus have created a formula to find the UK’s top 15 'zen' escapes. The number of spas, retreats, green spaces and yoga studios will bump a place up. Conversely, fast WIFI speed will see a location lose points.

So if you’ve been enjoying a digital detox over Christmas and want to carve out some time to relax properly in 2022, check out this list from CFAH.

Where has the most spas in the UK?

It might surprise you to learn that the UK destination with the most spas is neither Bath - where the Romans first funnelled hot springs - or other famous spa towns, like Harrogate. According to CFAH’s calculations, Edinburgh tops the list with 104 spas. The city which Scottish poet Hugh McDiarmid memorably called “a mad god’s dream” has a striking number of tranquil pools in its midst.

Devon came in second place, with 85 spas and four retreats. The southwest county is well known for its stunning fossil cliffs and sandy beaches, but it also has plenty of places to get the star treatment.

In fact, Devon was named the UK’s best zen escape overall, with a score of 86.96 according to the rankings. A high number of green spaces and CBD shops also helped. CBD is a naturally occurring compound extracted from hemp, and much praised for its therapeutic qualities. Shops sell all kinds of things with it, from oil to honey and bath bombs.

Which UK city has the most yoga studios?

A high number of yoga studies is another sign of a city full of peaceful nooks. Brighton has a whopping 100 studios in which you can salute the sun and downward dog to your heart’s content.

Bath came in close second with 97 yoga studios. The picturesque city is a lovely base from which to explore the Somerset countryside, with visits to Cheddar Gorge and Glastonbury.

Edinburgh, Hampshire and Wye Valley also have plenty of yoga studios: 84, 83 and 78 respectively. Some of these may be a short distance away, as CFAH also counted places within an hour’s drive of each area.

What about green spaces?

Relaxation is a state of mind. But it certainly helps to have some gorgeous green views to get lost in, and walks to ramble along. The Cotswolds and the Lake District were given the highest ‘great’ rankings for this, alongside New Forest, Wye Valley and Pembrokeshire in Wales, and Devon and Cornwall on the UK’s southern tip.

Wye Valley straddles the Welsh-English border; it's a slimmer Area of Outstanding National Beauty (AONB) than the Lakes or Peak District, but utterly deserving of that title. If you’re a fan of Netflix series Sex Education, you’ve no doubt already admired the beautiful valley that Otis’s big red house perches atop. That’s located in the village of Symonds Yat.

It’s not only a great filming location, but the fifth best overall UK destination for a zen weekend.

The most ‘zen’ escapes ranked in full

Taking into account the number of spas, retreats, green spaces, CBD shops, yoga studios, WIFI medium download speed - plus the the area’s 'happiness' rating - these are the UK’s most zen locations: