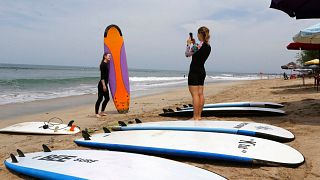 A tourists has her photo taken with a surfboard on a beach in Bali, Indonesia.   -   Copyright  AP Photo/Firdia Lisnawati
By Rosie Frost  •  Updated: 13/12/2022

On Tuesday (6 December) Indonesia’s parliament approved a new criminal code that bans sex outside of marriage.

Passed with the support of all political parties, it will apply to Indonesians and tourists alike with a punishment of up to one year in prison. New laws also prohibit unmarried couples from living together.

Currently, adultery but not sex outside of marriage is banned in the country and the new law won’t come into effect for three years.

But there are worries about what this development means for tourists.

The deputy chief of Indonesia’s tourism board Maulana Yusran told Reuters that the new regulations are “totally counterproductive” when the country is attempting to recover from the COVID-19 pandemic.

“We deeply regret the government have closed their eyes. We have already expressed our concern to the ministry of tourism about how harmful this law is.”

How will the sex ban affect tourists in Indonesia?

Destinations like Bali are popular with visitors from around the world, but especially with Australians. More than a million people visit Indonesia from Australia each year.

Newspapers in the country have dubbed the new legislation as the “Bali bonk ban”.

“I do not really think it’s a good idea but it isn’t the first time it’s happened,” Jeremy Finch, an Australian tourist in Bali told AFP. “I think in 2019 they tried to bring it in and it failed.”

Australia has said it is “seeking further clarification” on how the ban will impact tourists in Bali and other parts of the country.

A spokesperson for the US State Department also told a news briefing that the country was concerned about how the changes could impact citizens visiting and living in Indonesia.

Alongside discouraging travellers from visiting Indonesia, it may also stop international investment in the country’s tourism industry.

“Criminalising the personal decisions of individuals would loom large within the decision matrix of many companies determining whether to invest in Indonesia,” US ambassador to Indonesia Sung Kim warned.

But authorities insist that, despite the law technically applying to tourists and locals, the marital status of foreign visitors will not be checked. There are limits on who can report people breaking new ‘morality’ laws. It is restricted to people such as parents, spouses or children of suspected offenders.

Indonesia's deputy justice minister has promised that tourists will not be prosecuted under the ban on extra-marital sex.

How have human rights organisations reacted to the ban?

Amnesty International Indonesia’s executive director Usman Hamid described it as “appalling” and a “significant blow” to the country’s progress on human rights.

Consensual sexual relationships should not be treated as a criminal offence or violation of ‘morality’.

“Outlawing sex outside marriage is a violation to the right to privacy protected under international law,” he said.

‘Morality’ provisions could even be misused to criminalise victims of sexual assault or members of the LGBTI community he added. While homosexuality is not illegal in most of Indonesia, same sex marriage is not recognised.

“Consensual sexual relationships should not be treated as a criminal offence or violation of ‘morality’.”