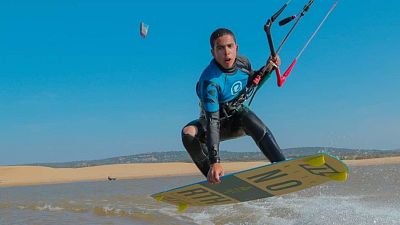 As you wander along the beach in the Moroccan port town of Essaouira - with its camels, horses, large sand dunes and easy going locals - you’d be forgiven for thinking that time has stood still.

Essaouira has been popular with creative types since the 18th century. Attracted by its rich culture and old traditions, it’s a bustling yet laid back Medina with local handmade crafts, restaurants, boutiques and rooftop bar Taros. These are a magnet for actors, artists, writers and musicians - as well as tourists looking for a quieter Moroccan escape.

One of Essaouira' most talked about visitors is Jimi Hendrix. He came to the city for 11 days in the summer of 1969. Visually, very little has changed in the Medina since then.

Where can you kitesurf in Africa?

There are several Moroccan destinations popular with kitesurfers - Tangier, Tahaddart and Azemmour included. But Essaouira is a magnet for kitesurfers between April and September every year because of its wind. It’s known as the windiest city in Africa.

On my first morning in Africa’s windiest city, the air was still. For kitesurfing, these conditions are far from ideal.

Explora Watersports is one of the top destinations for extreme water sports. I was in Essaouira to discover why.

I joined a group on the beach for a fitness and stretching class. Like me, everybody was there to have fun, learn to kitesurf or improve their kitesurfing skills. Friendships were quickly formed.

We spent the morning learning how to surf while waiting for the wind to return. We were clad in wetsuits, surf boards and enthusiastic attitudes.

Our guide, Momo, escorted us down to the sea edge, talked us through the basics, and showed us how to balance. The rest was down to us as we headed into the Atlantic Ocean with our surfboards.

It was a fast learning curve. After being battered by the board and power of the waves a couple of times, I managed to get up on the board and ride a wave. It took patience, great instruction and balance.

An introduction to kitesurfing

Later that morning, our hard work was rewarded with wind. We ran back to Explora Watersports to get into our harnesses.

During the intensive training session, we learned about the equipment, how to set up the kite and control it safely. It was obvious that there was no way any of us were getting near the ocean until our instructors judged we were ready.

A couple of hours later, we were supposedly ready to have a go at flying the kite that was attached to our waists by the harness. One at a time, the kite was thrown into the air. Our immediate reactions kicked in as we held on to the bar with all our might. The very opposite of what we were meant to do.

To gain control over the kite, it’s imperative to hold on to the bar gently. It was difficult as the wind was picking up and the kite was controlling me. I spent some time getting dragged along the beach. But with practice and the desire not to be laughed at by passers by, I and the rest of the group were ready to get into the sea.

It’s here that we started to get our heads around the idea that a kite is capable of carrying our body weight through water.

By steering the kite with a gentler touch and keeping it in the air, meanwhile rotating it in a figure of eight pattern, I started to feel myself getting pulled through the water. Feeling a sense of achievement we agreed to break for a late lunch.

The moment of success

Back in the water, with a guide each and at least 30 metres of ocean to ourselves, I found it difficult to power up without the kite pulling me in the opposite direction of the board. Resulting in me crashing the kite multiple times.

With the ever-patient guidance of an instructor called Mehdi, I managed to turn the board at the same time that the kite began to lift me into the air. I was carried about a metre before being thrown into the sea.

The only way to stay on the kiteboard was to keep trying. After a few hours, I was on the board with the wind and sea spray in my face gliding between the waves.

The future of kitesurfing

Kitesurfing is increasing in popularity. It’s the latest sport to join the Olympics and will be featured for the first time in Paris in 2024. Sadly, I’m not confident that my skills will be at the standard they need to be at to enter.

Are fake COVID tests being used more than we think?