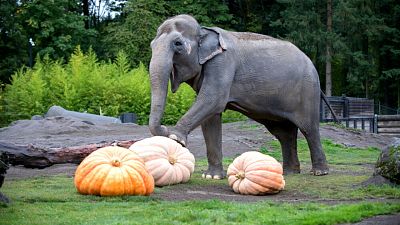 In preparation for Halloween, elephants at Oregon Zoo in the US are participating in their favourite annual tradition: the ‘Squishing of the Squash’ festival.

The event showcases the incredible strength of the wildlife park’s five Asian elephants, as they smash their way through a selection of giant squashes.

The pumpkins were donated by two members of the Pacific Giant Vegetable Growers Club, an association of competitive gardeners famous for producing award-winning crops. One gourd weighed more than 650 pounds (300 kilograms).

The tradition - now in its 23rd year - dates back to 1999 when Hoffman’s Dairy Garden of Canby contributed a prize-winning 828-pound (376 kilogram) pumpkin. Local farmers used to donate overstock crops to help with the zoo’s enrichment programmes, hoping to provide "stimulating and challenging environments, objects and activities" for the animals.

And this year’s squash harvest was no exception.

“They got one 650-pound pumpkin and a couple more pretty big ones to play with,” says Senior Keeper Dimas Dominguez.

“First they destroy them, then they enjoy them.”

The event normally attracts hundreds of visitors from around the city. But with social distancing requirements still in place, this year’s spectacle took place behind closed doors.

“The event was a little different this year, but the elephants didn’t seem to mind,” Dominquez smiles.