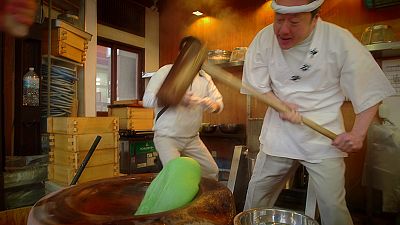 This week we visit the Japanese city of Nara, known for many beautiful sights, but also home to what are known as the country’s fastest mochi pounders.

Mochi is rice that is made into dough and then quickly kneaded … or rather beaten with large wooden hammer-type tools.

Just before putting on a traditional white jacket and joining the mochi pounders in the kitchen, Euronews’ Seamus Kearney reported: “And perhaps the best way to understand this tradition is to give it a go myself … or at least try.”

Once pounded, mochi is used for sweet or savoury treats.

“Well at least no one was hurt, so now I can enjoy the results of my hard work,” said Seamus, trying a mochi cake with sweet red bean paste inside.

As well as watching the full episode, check out the mochi pounding in 360°:

Mitsuo Nakatani, a master mochi-maker, told Postcards: “We’ve been making mochi like this in my home town for a long time.

“To make good mochi, it’s important to beat it quickly before it cools down.”

And it is also best to eat it fresh.