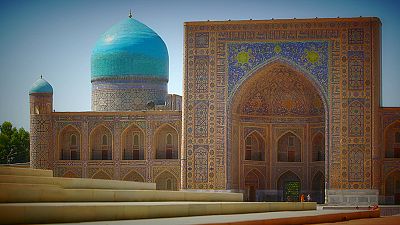 We resume our collection of Postcards from Uzbekistan in the famous Registan Square in Samarkand.

One of the impressive attractions here is the Tilla-Kori Madrassah, where Islamic studies were held.

This 17th-century building is included on the UNESCO World Heritage List.

Euronews’ Seamus Kearney reported: “The name of the madrassah, Tilla-Kori, means golden artwork, and you understand where that comes from when you go inside the main dome-covered mosque.”

Almost every surface on the inside of the dome is gilded, with stunning decorative features that attract thousands of visitors every year.

Tulkin Okbutaev, a Samarkand guide, told Postcards: “This madrassah was built between 1646 and the 1660s according to the order of the ruler of Samarkand.

“And this madrassah was the last to be added to this architectural complex of Registan.”

Tilla-Kori was seen as the perfect symmetrical addition to the square, helping it to become the iconic image of Samarkand.