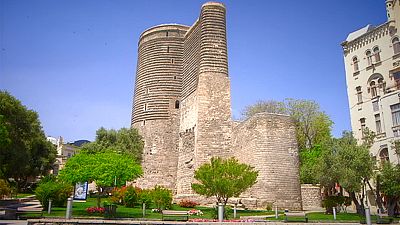 We finish our series of Postcards from Azerbaijan back in the capital, Baku.

The city is fast developing with modern structures, but the Old City remains popular for visitors and locals alike.

The buildings here date back to at least the 12th century, a melting pot of different cultural influences.

“And there’s actually a mystery about what one of the main attractions, the Maiden Tower, used to be,” reported Euronews’ Seamus Kearney.

“Was it a guard tower, an observatory, or some kind of ancient temple? The experts have differing views.”

Arif Mammadov, an Old City guide, told Postcards: “There is a combination of the western and the eastern architectural styles, like Gothic, Baroque, Rococo and the Classic style.”

Often referred to as an open-air museum, the Old City joined the UNESCO list of World Heritage Sites in 2000.

Baku has greatly expanded, but many say its historic neighbourhood will always be the heart of the capital.