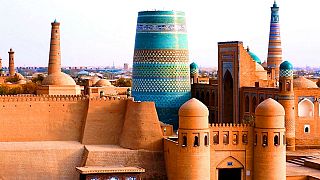 It is known as ‘the museum under the sky’ and has become one of the major attractions for visitors to Uzbekistan.

Khiva is an ancient city in the west of the country and is one of the oldest in Central Asia.

Dating back more than 2,500 years, Khiva was added to the UNESCO world heritage list in 1990.

It is surrounded by two impressive walls and boasts remarkable blue domes and minarets.

Khiva is described as being part of the fairytale “Thousand and One nights” and visitors can spend days exploring the palaces and majestic homes, mosques, mausoleums, shops, arches and domes and minarets that have become iconic.

The inner wall, which rises to about 10 metres in places, has four entrances with splendid gates.

The city has more than 50 architectural monuments in the ancient inner-town, which is known as Itchan-Kala, and which is spread out over 26 hectares. The outer-town is known as Deshan-Kala.

One of the great things about Khiva is that everything is viewable by foot, with the main attractions within walking distance.

There are so many small paths and alleyways to walk down that it’s very easy to meander and discover everything at a leisurely pace. It’s worth having a map, though, to make sure you don’t miss out on anything.

Visitors must also remember to look out for some of the high vantage points, to get a bird’s-eye view of Khiva.

The tallest minaret in Uzbekistan can also be found in the city.

Khiva was actually the last capital of the ancient Khorezm territory and described as the last resting place for caravans before they crossed the desert to Persia.

The capital of Uzbekistan’s modern-day Khorezm region is Urgench, and the region continues to play an important role in the economic development of the country.

Khiva was an important stop on the historic Silk Road, and as you stroll through the streets you quickly get a feeling of what it must have been like living in the city all of those centuries ago.

Everyone will have their own favourite monument in Khiva, but among the most popular are the Djuma mosque, the Kalta Minor minaret, the Mausoleum of Pahlavan Mahmud, the Ark, the Tash Hovli Palace and other mosques and madrasas.

And don’t forget to check out the sights after the sun has gone down, as the lighting can be very impressive and give the city a whole new feel.

The well-preserved architecture and the way the monuments have been constructed and placed within the walls of the city make Khiva unique.

As well as being on the UNESCO list, Khiva was designated as a reserve and site of national importance in 1967 and is classified for special protection.

The colours and the intricate craft work that has been used in the decoration of the various buildings are exquisite, with so many types of materials used in one single structure.

The other great thing about Khiva is that so much of it is accessible, to really get up close to the beautiful detail.

Tour guides are available to hear the full history about the various locations and the cost is very reasonable.

Khiva is also famous for the mathematician considered to be the ‘father’ of algebra and the decimal point, Abdullah Muhammed Ibn Muso Al-Khorezmi.

He lived from 780 to 850 and is remembered with a large statue in front of the fortress.

There are many hotels and guest houses to choose from in Khiva, with some inside the old city fortress and some outside.

There’s also a wide range of restaurants and cafés, with the best of Uzbek cuisine on offer. Scores of shops sell souvenirs and local arts and crafts.

There are also tourist complexes further out of town, with traditional-style rooms and yurts to stay in.

Visitors should also make sure they check out an evening of Uzbek music and traditional dance.

There are numerous hotels and restaurants that organise this on a daily basis.

And don’t forget to watch our main video report, which focuses on the unfinished Kalta Minor Minaret in Khiva:

Our second Postcard from Uzbekistan: the famous unfinished minaret …