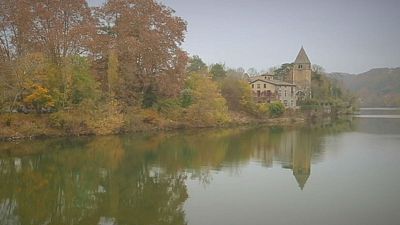 This week in Postcards from Lyon we visit one of the French city’s popular getaway spots.

It is a great place for stepping back in time but there is also a modern side, including a belvedere with its magical glass lanterns

The district around Ile Barbe is just six kilometres north of the city, with riverside walkways and historic sites to explore.

Euronews’ Seamus Kearney reported: “It is a great place for stepping back in time but there is also a modern side, including a belvedere with its magical glass lanterns.

“It’s the perfect spot for a travel photo, and one of numerous works of art that now grace Lyon’s riverbanks.”

The artist who made the belvedere lanterns is Paris-based Jean-Michel Othoniel.

One of his most famous works of art is part of the entrance to the Palais-Royal metro station in Paris.

As well as discovering the beauty of the Saône river, the public can also look around parts of Ile Barbe.

Clémence Gabert, a Lyon guide, told Postcards: “We know that there was a monastery here in the 5th century, one of the oldest in the Lyon region and in France.

“There are still traces of it, which you can visit, including a Roman church.”

A cycle ride from the city to Ile Barbe is a popular day trip, with local cafés and restaurants also available.

For more information about the artwork along the Saône river: