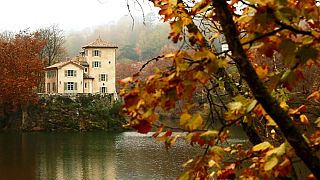 It’s a popular getaway spot for Lyon residents, just outside of the city along the Saône River, but many visitors to the former capital of the Gauls may not know about it.

Ile Barbe is an historic island in the middle of the river, north of the district of Vaise, and it’s perfect for a morning or afternoon stroll, both in summer and winter.

The colours of the trees in autumn add to the magical feel, as you take in the views of the ancient buildings on the island, including a Roman church.

One of France’s first monasteries was based here, dating back to the 5th century, and traces of those times can still be seen.

Ile barbe can only be reached by an old bridge, which pedestrians can walk on. There’s a public park in front of the entrance to the island and it’s possible to go inside and explore.

Some parts of the island are private and off limits to visitors, but there’s enough to see to really get the feeling of stepping back in time. There’s also a hotel and restaurant on the island.

The perfect day-trip is a bike ride from the city to Ile Barbe and lunch or dinner at one of the nearby cafés or riverside restaurants. The Jocteur boulangerie, which is in a small square opposite Ile Barbe, is particularly delicious.

Just nearby, in contrast, is a colourful, modern work of art, which is part of the redevelopment of the Saône riverbanks.

The belvedere, with its beautiful glass lanterns, is the work of Paris-based artist Jean-Michel Othoniel.

Numerous works of art – including statues, African masks, viewing platforms and other art installations – now grace the Saône riverbanks, as part of a nature walkway that extends for many kilometres.

Othoniel, who hails from Saint-Etienne, about 45 minutes’ drive south of Lyon, is famous for works including his transformation in 2000 of the entrance to the Palais-Royal metro station in Paris.

The blown glass used in the work is Murano glass from Italy.

On his work, Othoniel is quoted as saying: “The glass is in harmony with the water, the greenery, the light from the sun and the moon. In this project, it is possible to bring back the enchantment to places which although out on the margins can already be the right place for dreams, and to enhance in a sensitive manner their poetic and wonderful character.”

The belvedere makes use of the former lock of Caluire-et-Cuire and it’s the perfect place to step out over the water and take some good Lyon travel photos.