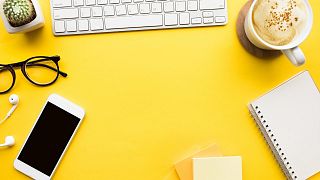 The concept of the four-day week is being slowly embraced in an increasing number of countries.   -  Copyright  Canva
By Josephine Joly  & Luke Hurst  •  Updated: 24/01/2023

Conversations around the four-day workweek have been reignited by the COVID-19 pandemic, with workers and employers rethinking the importance of workplace flexibility and benefits.

The idea is simple – employees would work four days a week while getting paid the same and earning the same benefits, but with the same workload.

Hailed as the future of employee productivity and work-life balance, advocates for the four-day workweek suggest that when implemented, worker satisfaction increases, and so does productivity.

Trade unions across Europe are calling for governments to implement the four-day working week, but which countries have embraced the idea and how is it going so far?

Belgium introduces a four-day workweek for employees who want it

In February, Belgian employees won the right to perform a full workweek in four days instead of the usual five without loss of salary.

The bill came into force on November 21, allowing employees to decide whether to work four or five days a week.

But this does not mean they will be working less – they will simply condense their working hours into fewer days.

The goal is to give people and companies more freedom to arrange their work time.

Belgian prime minister Alexander de Croo hopes that the change will help to make Belgium’s notoriously rigid labour market more flexible and will make it easier for people to combine their family lives with their careers.

Only about 71 out of 100 Belgians in the age group from 20 to 64 years have a job, fewer than the eurozone average of about 73 and a full 10 percentage points less than in neighbouring countries such as the Netherlands and Germany, according to Eurostat data for the third quarter of 2021.

The country’s seven-party federal coalition agreement has set a goal for an employment rate of 80 per cent by 2030, an objective that would serve to keep its legal pensions affordable or finance future tax cuts.

However, the prospect of a four-day workweek is not appealing to all.

Some full-time employees will indeed be working very long days if they choose to condense their hours, and others, such as shift workers, will simply not have the option of that flexibility.

Companies in the UK who have run a six-month trial of the four-day workweek are now planning on making the shorter workweek permanent, after hailing the experiment as "extremely successful".

Dozens of companies have been involved in the six-month pilot programme - the biggest of its kind - which was launched on June 6 to study the impact of shorter working hours on businesses’ productivity and the well-being of their workers, as well as the impact on the environment and gender equality.

Some 70 UK companies and more than 3,300 employees signed up for the programme, run by researchers at Cambridge and Oxford Universities and Boston College, as well as the non-profit advocacy groups 4 Day Week Global, the 4 Day Week UK Campaign and the UK think tank Autonomy.

A large majority - some 86 per cent - of the companies which took part in the trial said they were "extremely likely" or "likely" to consider keeping the four-day week policy after the trial period, according to a survey that saw the participation of 41 out of the 70 organisations trialing the shorter workweek.

The pilot in the UK is one of several worldwide being run by 4 Day Week Global, which advocates for a shorter workweek.

"Similar programmes are set to start in the US and Ireland, with more planned for Canada, Australia and New Zealand," Joe Ryle, director of the 4 Day Week UK Campaign, said.

Scotland and Wales to join the growing global movement

In Scotland, a government trial is due to start in 2023 while Wales is also considering a trial.

The decision was the culmination of a campaign promise made by the ruling Scottish National Party (SNP).

Workers will have their hours reduced by 20 per cent, but won’t suffer any loss in compensation.

The SNP will support the participating companies with about £10 million (€11.8 million).

The government pointed to a recent poll conducted by Scottish think tank the Institute for Public Policy Research (IPPR) in Scotland that showed 80 per cent of the people responding to the idea were highly positive of the initiative.

The respondents said the programme would greatly enhance their health and happiness.

Scotland pointed to Iceland and its strong results as a big reason for taking a chance with the four-day workweek.

Some Scottish businesses have already started their own truncated workweeks, with Glasgow-based UPAC Group recently saying its employees will enjoy a four-day week with the same salary after running a successful pilot programme.

In Wales, the Petitions Committee within the Senedd (Welsh parliament) recommended on January 24 that the Welsh government conduct a pilot scheme, following the publication of a report into the idea.

Jack Sargeant, Member of the Senedd and chair of the committee told the website Nation.Cymru that Wales should lead the way in exploring the four-day week.

“It is a bold proposal but no bolder than those campaigners who fought for a five-day week, paid holiday and sick pay which we now take for granted,” he said.

“When we’re calling for a four-day week we’re (talking about) reducing the working hours within an organisation, but not a reduction in the rate of pay. There are a number of trials out there which suggests that productivity increases".

It is now up to the Welsh government to consider the proposal.

Sophie Howe, the Future Generations Commissioner, has also called on the government to introduce a similar four-day working week trial, at least in the public sector.

After the small left-wing party Más País announced last year that the government had agreed to their request to launch a modest pilot programme of a four-day working week, Spain launched a pilot project in December.

The pilot will help SMEs cut their working week by at least half a day, without reducing salaries.

The pilot is a test to see if productivity can be boosted. Companies signing up can receive aid from a €10 million government fund, but they must design ways to increase productivity that compensates for the wage cost overruns, Spain's Industry Ministry said.

These improvements have to be implemented within a year, while the company must stay on the programme for at least two years.

For the first year of the pilot the government will partly finance wage costs, and will help to fund training to improve efficiency.

Only workers with a full-time permanent contract can take part.

Iceland: One of the leaders in the four-day working week

Between 2015 to 2019, Iceland conducted the world’s largest pilot of a 35 to 36-hour workweek (cut down from the traditional 40 hours) without any calls for a commensurate cut in pay.

To ensure quality control, the results were analysed by British think tank Autonomy and the Icelandic non-profit Association for Sustainability and Democracy (ALDA).

The pilot was dubbed a success by researchers and Icelandic trade unions negotiated for a reduction in working hours.

The study also led to a significant change in Iceland, with nearly 90 per cent of the working population now having reduced hours or other accommodations.

Researchers found that worker stress and burnout lessened and there was an improvement in life-work balance.

However, not every government shared Iceland’s success with the four-day working week.

In Sweden, a four-day working week with full pay was tested in 2015 with mixed results.

The proposal was to try six-hour workdays instead of eight-hour ones without loss of pay, but not everyone was pleased with the idea of spending money on the trial.

Even left-wing parties thought that it would be too expensive to implement this on a large scale.

But positive results were observed within the orthopaedics unit of a university hospital, which switched 80 nurses and doctors over to a six-hour workday and hired new staff to make up for the lost time.

The response from the medical staff was positive, yet the experiment also faced a lot of criticism and was not renewed.

However, some companies, such as carmaker Toyota, chose to keep reduced hours for their workers.

The car firm had already decided to do this for mechanics 10 years ago and stuck with its decision.

Finland has not introduced a four-day workweek, despite widespread claims

The Finnish government allegedly wanted to introduce a four-day working week, as well as a six-hour day.

However, it turned out that this was fake news, which the government then had to put the record straight.

Current prime minister Sanna Marin tweeted about the idea in August 2019 but it has not been included in the government’s agenda.

Yet, trade unions are calling for further reduced working hours.

According to a Forsa survey, 71 per cent of people working in Germany would like to have the option to only work four days a week.

Just over three-quarters of those surveyed said they are supportive of the government exploring the potential introduction of a four-day week. Among employers, more than two out of three supported this.

Almost half of employers (46 per cent) said they see trialling a four day week in their own workplace setting as "feasible".

However, whether such a measure will be implemented or discussed is yet to be seen. So far, it is mainly smaller start-ups that are experimenting with a shorter working week.

In other countries such as Japan, it's the larger companies that are venturing into this territory, following the Japanese government’s announcement in 2021 of a plan to achieve a better work-life balance across the nation.

There are several reasons that this could be good for the country, where death by overwork claims many lives.

In 2019, tech giant Microsoft experimented with the model by offering employees three-day weekends for a month.

The move boosted productivity by 40 per cent and resulted in more efficient work.

Meanwhile, in New Zealand, 81 employees working for the consumer goods giant Unilever are currently taking part in a year-long trial of a four-day workweek at full pay.

"Our goal is to measure performance on output, not time. We believe the old ways of working are outdated and no longer fit for purpose," said Nick Bangs, Managing Director of Unilever New Zealand.

If the experiment turns out to be a success, it will reportedly be extended to other countries.

Strong interest in the US and Canada

According to a survey by cloud-software vendor Qualtrics, a whopping 92 per cent of US workers are in favour of the shortened workweek, even if it means working longer hours.

Indeed's survey of 1,000 employers of office workers in Canada found that 51 per cent of large companies with 500+ employees would be "likely to implement 4-day workweeks".

Comparatively, 63 per cent of medium-sized organisations with 100-500 staff members say they’d be prepared to implement a shorter workweek.

A majority of Canadian full-time workers (79 per cent) were also found to be willing to shorten their five-day workweek to four days, according to a new report by Maru Public Opinion.

Overall, the four-day workweek seems to be slowly but surely gaining traction across the globe, but whether governments will definitively adopt the idea is yet to be seen.