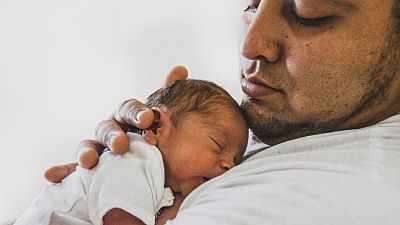 Twitter CEO Parag Agrawal made headlines in February when he announced that he was taking a "few weeks" of paternity leave after the birth of his second child.

A man taking time off to spend time with his newborn baby doesn’t sound particularly newsworthy, and yet because there are still such strong disparities between the time fathers take off following the birth of a child compared to mothers, it has struck a chord with many to see a CEO of a tech giant make the leap.

An EU directive on work-life balance was adopted in June 2019. It sets a minimum of 10 days paternity leave to be implemented in all EU countries by August 2022.

A little news: Twitter’s new CEO, @paraga, is expecting his second child and will take paternity leave soon, in contrast to tech leaders like Elon Musk who have downplayed fathers’ role in childcare. https://t.co/V7OUr91cjp

Thank you @paraga for leading by example and taking paternity leave. I wish leaders did this when I was early in my career and becoming a father. We have 7500 people @twitter who have your back! https://t.co/MzDEtwCxOL

The directive aims to encourage a more equal sharing of parental leave between men and women, address women’s underrepresentation in the labour market and better support a work-life balance for parents and carers.

There are a number of factors that prevent new fathers from taking time off work. Research shows that gender norms, cultural expectations and stigma still play a role. But so too does the level of compensation and the flexibility of leave arrangements.

So, how do European countries compare when it comes to paternity leave rights?

Spain is one of the leaders when it comes to equality between both parents in Europe. In January 2021, paternity leave was extended to 16 weeks. This time is fully paid and is equal to paid maternity leave in the country.

Italian fathers are given 10 days paternity leave on full pay and it is compulsory. This was introduced in 2021, increasing paid leave by an additional three days. In contrast, mothers have five months maternity leave equal to 80 per cent pay which is also compulsory.

If the child is not in the mother’s care, the father then becomes entitled to the same leave.

France introduced extended paid paternity leave in 2021 in a bid to allow fathers to become more involved with their children and reduce the inequalities in the childcare burden. The reform doubled the length of paternity leave to 28 days and made one week mandatory.

Fathers have no statutory paternity leave in Germany. However they can take parental leave for up to 14 months where they are compensated between €300 and €1800. They cannot be fired from their job while they are on this leave.

Currently fathers in Poland are entitled to two weeks of paternity leave. The mother is entitled to 20 weeks, 14 of which she must use. The other six weeks can be transferred to the father.

The Polish government plans to make changes to this by August 2022 to comply with the EU directive. Polish media reported this week that according to draft changes to the labour code, each parent will have a guarantee of 9 weeks leave which cannot be transferred to the other.

Parental leave will also be increased from 32 weeks to 41 weeks, and the maternity pay will be increased to 70 per cent of a parent’s allowance.

Paternity leave in Ireland is two weeks. Paternity benefits amount to €250 per week. Some employers may cover the full wages during the paternity leave but they don’t have a legal obligation to do so. Fathers can also take up to 26 weeks’ unpaid parental leave.

Sweden performs strongly in Europe when it comes to time off for the father after the birth of the child. The country dooesn't use the terms maternity or paternity leave, instead it uses the term parental leave, and there is no disparity between the time each parent gets off.

Parents are entitled to 480 days paid parental leave between them, with each parent entitled to 240 of these days while 90 of the days are reserved exclusively for each one. If either parent decides not to take those 90 days they can’t be transferred to the other parent. A single parent is entitled to the full 480 days.

Fathers are entitled to up to two weeks of paid paternity leave. There is also shared parental leave where parents can share up to 50 weeks of leave and up to 37 weeks of pay.

One parent is entitled to take additional paid leave until the child reaches 2 years of age. The amount paid is 70 per cent of previous earnings, however, it can’t be more than 70 per cent of twice the minimum daily wage.

Paternity leave in the Netherlands is one week paid. Fathers can then take an additional 5 weeks leave that can be supplemented by their social security for up to 70 per cent of their salary. Either parent can also take unpaid parental leave up to 26 times the number of weekly working hours.

Since the beginning of 2022 fathers in the Czech Republic are entitled to two weeks paternity leave. If they have made payments into sick-leave insurance they will receive 70 per cent of their wage.

Parental leave is also on offer to the mother or father. It can last up to 3 years and in that time the parent can access a parental allowance which can be paid out up to a maximum of CZK 300,000 (€12,336) for that period.

Same-sex parents being left behind

Same-sex parents are discriminated against in several European countries, such as Hungary and Bulgaria, when it comes to parental leave.

As same-sex couples are neither allowed to marry or adopt in Hungary, they are not eligible for parental leave as a couple; if one of the partners has a young child, he or she is eligible in their own right, but their partner is not.

A study of parental leave entitlements in 2019 found that same-sex male couples in the vast majority of OECD countries are entitled to substantially less paid leave than opposite-sex parents and same-sex female parents.

European countries are taking strides towards improving the rights of fathers to equal time off to mothers after the birth of a child, helped along by the EU’s directive. However there is still work to be done to bridge the gap and encourage fathers to actually take up their entitlements.