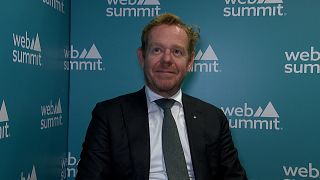 NATO has shown its robust determination to help Ukraine defend itself against Russia’s invasion but ensuring it has the latest technologies to tackle climate change presents another challenge for to the 30-nation alliance.

“We're now confronted with a Russian invasion of Ukraine, so a large-scale conflict on European soil that many would have thought unthinkable a few years ago,” David van Weel, NATO’s Assistant Secretary-General for Emerging Security Challenges, told Euronews Next.

“It just goes to show that we need to prepare for everything”.

One of the big immediate threats is cyberattacks, which van Weel believes have become a big part of the fighting in Ukraine.

The war has been fought with bombs as well as bytes with Russia launching cyberattacks on Ukraine before boots invaded the country on February 24, with attacks still occurring on critical infrastructure.

The best way to defend yourself against them is to be resilient, advised van Weel.

“Make sure that any attack can be repelled soon and that system are not affected in a very serious way. At NATO, we work on this resilience and we help allies in increasing that resilience at the same time, we need to respond to attacks that we see happening,” he said.

Technology is now playing a substantial role in the war, which van Weel says changes its character.

At the moment, Russia is using a large number of Iranian drones in attacking civilian infrastructure in Ukraine, he said, which means NATO needs to assist Ukraine in defending against a new threat.

“It’s a continuous game of adopting to distract and then making sure you have new technological, innovative solutions to counter that threat,” van Weel told Euronews Next.

How is NATO using technology?

To do so, the alliance has two initiatives: the Defence Innovation Accelerator for the North Atlantic (DIANA), and the NATO Innovation Fund, a venture capital fund. Both focus on bringing deep technology dual-use solutions into the armed forces.

Our challenge is really to make sure that we have a workable, agile way of communicating with innovators and bringing in new technologies at a speed of relevance.

Besides deep tech, NATO also sees artificial intelligence (AI), the use of Big data, and the use of autonomous vehicles or aircrafts or ships as crucial. Quantum computing will be the next technology that NATO will tackle.

But the key to all these technologies, van Weel said, is start-ups so the alliance can “make sure that we have the most novel technologies at our disposal to defend our 1 billion citizens”.

However, the main challenge is to have better communication with innovators.

“A lot of times, the military doesn't know what new technologies are around the corner and a lot of the innovators don't know what is needed in a military context,” he said, adding that bridging the gap is NATO’s first priority.

The second is to bring those new technologies into play quickly.

“The defence organisations and governments, in general, are not famous for having fast procurement processes,” he said.

“Our challenge is really to make sure that we have a workable, agile way of communicating with innovators and bringing in new technologies at a speed of relevance”.

The threat of nuclear war

Nuclear weapons have existed for around 80 years but fears have mounted that Russian President Vladimir Putin would use them.

A nuclear war cannot be won and must not be fought and that's a message that's been made very, very clear to President Putin.

US President Joe Biden warned that since Russia's invasion the risk of a nuclear "Armageddon" is at its highest level for 60 years.

"A nuclear war cannot be won and must not be fought and that's a message that's been made very, very clear to President Putin and also in the public domain, and which I will reiterate now," said van Weel.

"So the consequences of using a nuclear weapon are very severe and I think that he's very, very, very aware of that".

The fight against climate change

But war is not the only threat to the alliance.

He said it will cause more natural disasters, more migration, and more scarcity of food and water as well as energy.

“We see now in Europe how critical it is that we have our energy security in place and that we can actually get through the winter in a decent way,” he said.

“So, the number of challenges are far greater than just the traditional military threat and as a security organisation NATO prepares for that”.

The organisation has an action plan to address the growing threat.

The first part is awareness and knowing what is happening, such as the opening up of the Northern Sea Route as the ice recedes or the drying up of the Sahel region and how that could impact food, water and migration.

The second part is understanding and adapting to how climate change is affecting NATO bases and soldiers as extreme temperatures mean some soldiers are working in 50-degree centigrade heat, meanwhile military bases could also be flooded.

Being part of the solution is the final part.

“As society moves away from fossil fuels, the armed forces will not be left behind. And we need to think about that transition,” van Weel said.

“We are also part of the solution, and we are durable for the future to come”.