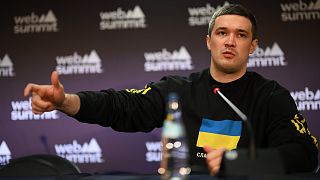 The war in Ukraine is "really a technological war," the country’s vice prime minister and minister of digital transformation, Mykhailo Fedorov said on Thursday as Microsoft announced an extension of its tech support for the embattled country.

As he spoke at a press conference at Web Summit in Lisbon, he said he had received a notification of a blackout back home and said he believed it meant a Russian attack on energy infrastructure had occurred, highlighting the role of technology in the war.

It has been a focal point of this year’s tech event - billed as Europe’s largest - with attention being drawn to its devastating use against citizens in a speech to attendees by Ukraine’s first lady Olena Zelenska on opening night on Tuesday.

After Russia invaded Ukraine on February 24, one of the first attacks was on Ukraine’s data centres, Feodorov added.

The minister, who visited Ukraine’s army at the beginning of the war, also told journalists at the press conference that one of the demands made by a military commander on the frontline was for a 3D printer.

As the war enters its eighth month, attacks are not just happening on the battlefield but there have also been Russian strikes on critical infrastructures, such as water supplies.

Cybersecurity is also a big concern as it has become crucial to protect those systems from attack.

"Today, technologies support our economy and also support the battlefield in terms of Artificial Intelligence and drones," Fedorov said.

Technology companies have shown their support to Ukraine in terms of cybersecurity and protecting civilians.

Microsoft is one such company to do so. The company’s vice-chair and president Brad Smith announced to the press conference a further $100 million (€102 million) aid package to support tech in Ukraine through 2023.

The package will extend support for the government, critical infrastructure, and other sectors that can continue to serve Ukrainian citizens through Microsoft Cloud.

By disbursing digital infrastructure into the public cloud, Microsoft and others have supported critical Ukrainian services.

The move brings the company’s total support for the country to more than $400 million (€410 million) since Russia’s invasion began in February.

"By disbursing digital infrastructure into the public cloud, Microsoft and others have supported critical Ukrainian services.

"This has played a critical role in protecting the resilience and security of Ukraine’s data and digital services even in the face of Russian cruise missile and other kinetic attacks on Ukraine’s government data centre and other physical assets".

Elon Musk’s Starlink has also provided satellite communications aid to Ukraine. However, Musk has previously hinted he could not continue supporting aid to Ukraine.

Asked about Starlink, Federov said: "We don’t see any problem [at present]".

"We are using other satellite communication tools and working with other companies".

He said one of the reasons he was at Web Summit was to speak with other communication companies.

"We want to scale solutions… communication is crucial," Fedorov said.