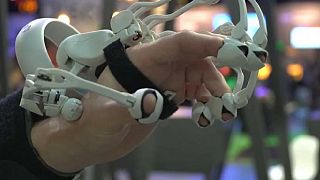 MAGOS has produced a smart glove that can record every hand movement   -   Copyright  Euronews
By Pascale Davies  •  Updated: 07/03/2022

Europe’s deep tech sector is having its moment and accounts for a quarter of the bloc’s start-up ecosystem.

Deep technology is the generic term that covers all tech that is based on tangible engineering innovation or scientific advances. It includes technologies such as artificial intelligence, robotics, quantum computing and blockchain.

​Europe is seeking to bolster firms in the sector to compete on the global stage. At the Mobile World Congress in Barcelona, Euronews Next spoke to three deep tech start-ups worth keeping an eye on.

The Swiss start-up is developing a technology that measures your facial expressions, such as eye movement and jaw biting through earbuds and then sends those signals to a small box connected to the device, which sits at the back of your neck.

This Internet of Humans technology uses its closed-loop system which translates brain waves and uploads this data to their cloud. Once processed, these signals can tell us a lot about our state of mind, including levels of tiredness, focus and other cognitive activity.

People will look back in 100 years and they will say people died from perfectly curable diseases because they just didn't know about it.

These health insights are then analysed and can help build knowledge about different mental states, which could ultimately help people hear or sleep better.

The start-up is working with the Japanese pharmaceutical company Takeda and is validating the technology for sleep onset neuromarker detection.

For the moment, the start-up is at the end of its seed stage and is a business-to-business company but its aim is to roll out its products to consumers, so that it could be used in multiple scenarios, including selecting your music playlist based on your mood.

The technology is still in development and health regulation is still needed.

“People will look back in 100 years and they will say people died from perfectly curable diseases because they just didn't know about it,” IDUN Technologies chief executive officer and co-founder Simon Bachman told Euronews Next.

However, he said one of the largest limitations of the medtech area and healthcare area is because regulation means there's a huge barrier to get into the sector.

Bachman said he welcomes regulation and the company has its own neuroethics committee that discusses issues of data sharing. He also said the company is actively participating in the dialogue on how neurotechnology could and should be regulated and is speaking to policymakers.

As for being a European start-up, Bachman said there “is literally no drawback”.

“Europe is the place to be because we are living in a connected world. And you know, the talents in Switzerland, especially, but also in Europe”.

Quantum computing is another sector that is taking off in Europe. It works by using quantum physics to create new ways of computing.

Quantum computers typically have an edge over regular computers in situations where there are lots of possible combinations, as they can consider these simultaneously.

Quantum computing can be used across multiple sectors, including by businesses for risk analysis, governments for cybersecurity and the pharmaceutical industry.

One start-up based in the United Kingdom that is making strides with this technology is Oxford Quantum Circuits.

“We are a pure-play, quantum computers service company, which basically means we build quantum computers and then operate them in the hands of customers so that they can solve some of the world's most challenging problems using quantum to create this quantum-enabled future,” Ilana Wisby, co-founder and CEO told Euronews Next.

The company launched this week with Amazon Web Services’ Amazon Braket so that for the first time quantum computing is now available by public cloud via Amazon Braket in Europe.

“So these are things that we can now provide,” she said, adding that they have now been able to have private customers work with them directly, which opens a much larger market for them.

The Greek start-up MAGOS is developing a hardware and software solution to revolutionise the interaction of users within the digital environment. It has produced an exoskeleton glove that allows you to touch and feel in the virtual world.

The wearable glove-type product is connected with a PC and digitises the motions in your hand with very high accuracy of how the fingers move.

The company uses unique sensors which are connected to every joint and capture every movement and feeling. This technology could be used by clinicians in training to perform procedures remotely and give data to health care providers from a distance, which may revolutionise hand rehabilitation.

“We see that the computing devices of the future will be the headsets the TED model displays for augmented reality and or any product that the current hardware will evolve to,” Magos CEO and founder Greg Agripolous told Euronews Next.

Though the technology is revolutionary, it is hard to compete as a European start-up, he said.

“We have some competitors from the US. The market there is much more mature and corporate and there is more investment in technologies.

“And the funds are available in the US way more than in Europe, so we are struggling a lot”.

However, Agripolous noted that despite those difficulties the start-up has managed to attract EU innovation funds and is attracting customers from the US.

Europe is trying to bolster its tech ecosystem to rival those of the United States and China with a new initiative.

The European Start-up Nation Alliance (ESNA) was first announced during the Portuguese Presidency of the Council of Europe in November last year.

It's a very good moment to be a digital entrepreneur in Europe.

ESNA is in charge of a new standard for start-ups across the bloc and will compile best practices as well as provide technical support and monitor start-up progress.

It also has the ambitious aim to double the bloc’s number of unicorns by 2030.

Member states have pledged commitments to ESNA, including France, which has committed to facilitating the creation of 10 to 20 late-stage investment funds with at least €1 billion under management and a boost in deep-tech financing.

At the Mobile World Congress, the digital and economic ministers of Spain, Portugal and Austria met to discuss how ESNA may shake up the bloc’s start-ups.

Too much fragmentation is another issue the alliance wants to solve.

“There are 27 different member states and legal frameworks (...), which is different from the US’s single market,” said André de Aragão Azevedo, Portugal’s Secretary of State for Digital Transition.

Pere Duran, the director of the start-up platform 4YFN (four years from now) said data protection was another issue for the bloc.

“I believe that there are several challenges, and one of them is to be able to compete with ecosystems such as China and the US, who probably do not have as many regulations as we do here on the tax areas and data protection," he told Euronews Next.

But Duran said the start-up scene in Europe is "really thriving" and investment in the bloc's start-ups is reaching record levels.

“More than 100 billion was invested in European tech last year so it's a very good moment to be a digital entrepreneur in Europe,” he told Euronews Next.