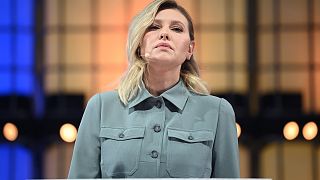 In a surprise appearance at Web Summit on Tuesday, Ukraine's first lady Olena Zelenska made an impassioned address calling for the help of the tech community in her country's fight against Russia's invasion.

"Your chosen profession - your field of expertise - is now a battlefield in Russia’s war against Ukraine," Zelenska told attendees at the opening ceremony of Europe's largest tech event in Lisbon.

"The dystopias we read about in science fiction novels and all the threats of life destruction are much closer than you think. We felt it in Ukraine because of Russian terror - because Russia puts technology at the service of terror".

In discussing tech's role in the conflict, the first lady shared accounts of victims who were killed or maimed in drone and missile strikes carried out since Russia began its invasion of the country in February.

Tech, she said, was largely being used for "Russia's terrorist hits" rather than to help the people of Ukraine.

"I believe that technology should be used to create, and to save and help people, not to destroy. I believe that such technology is the future. If it’s not, there simply won't be a future to look forward to," she said.

"You are the force that moves the world. You have a potential and technologies that can help, but not destroy. I am certain that, by helping Ukraine, you can move the world in the right direction. So I invite you to do so. Let's do it together".

Zelenska: 'Our big victories consists of small ones'

Russia has continued to target critical Ukrainian infrastructure with barrages of missiles, with strikes also hitting civilian buildings like apartment blocks and hospitals.

"They [Russia] are attacking our power plants, there are blackouts everywhere in the country... now, every day, we have no electricity, no communications and no internet for hours," the first lady said.

Discussing the work of her new foundation, which was established in September and seeks to raise funds for medical, educational and humanitarian aims in Ukraine, Zelenska also spoke about the growing mental health crisis in the country.

"I believe that our big victory consists of small ones. Small victories of every person. Victories over cold, hunger and despair," Zelenska said.

Her appearance at Web Summit has been another opportunity to reach out to the international community about the ongoing conflict as her husband, Ukraine's president Volodymyr Zelenskyy, has also done at events, summits and conferences since the war began.

I believe that our big victory consists of small ones. Small victories of every person. Victories over cold, hunger and despair.

In May, Zelenska addressed a gathering at Ukraine House during the World Economic Forum (WEF) meeting in Davos.

Ukraine has become a hot topic at Web Summit, which began on Tuesday and will see up to 100,000 attendees descend on the Portuguese capital this week.

A row over the freedom of speech erupted after Ukrainian delegates complained to organisers that Grayzone, a controversial far-left website that had published pro-Russian articles deemed to be propaganda, had been invited to the event. The invitation was later rescinded by Web Summit.

"We do our best to listen to our attendees or speakers partners. But in this instance, there was a considerable backlash to the participants that had been on the website for several months, and people kind of hadn't noticed them or certain people have noticed them," Paddy Cosgrave, the event's CEO and co-founder, told Euronews Next.

"Our job is, I think, to push the boundaries of debate and discourse," he said.

Around 60 Ukrainian start-ups are attending this year's Web Summit.