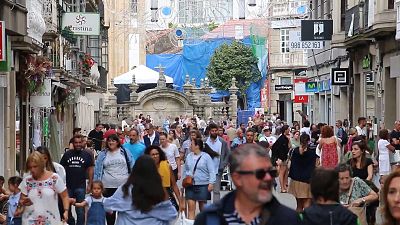 In Pontevedra, in north-west Spain close to the Portuguese border, pedestrians always have priority.

Local authorities have spent the last 20 years redesiging the 80,000-strong city so that it's easy and enjoyable to walk around, while cars are pushed out. In the few areas of the city centre where they are allowed, they're limited to a speed of 10 k/ph.

All these changes have paid off: no pedestrians have been killed in a road traffic accident in more than a decade.

Pontevedra: Everything is essential is walkable

Elena Herroro moved to Pontevedra from Madrid in search of an easier life.

"Everything here is pretty close," she says. "I have the health centre almost behind my house, the hospital is also close by, I have several supermarkets right under my apartment. So nothing essential is far away."

The city's new layout has also attracted local businesses, with 7% more shops and restaurants opening up.

"People go out to stroll around the city and that's a big benefit for local businesses, who get more sales and have a bigger impact," says Victor Riobó, owner of Miller Vintage Running Club.

Start small and let it grow

The first area to be pedestrianised in Pontevedra was the old town.

"Every city has its main commercial street, an artery that defines its character," says César Mosquera, councillor and promoter of pedestrianisation in Pontevedra. "If you pedestrianise it or make it pedestrian-friendly, you are transmitting an image: what's modern, what's cool, what's contemporary… is restricting cars."

The city council also created 'Metrominuto', a map similar to the subway maps of big cities but this one gives walking rather than journey times.

"It helps," says tourist Anxo Patiño. "It encourages you to discover the old districts of a city like Pontevedra by foot, strolling and enjoying every corner."

The city has also installed lighting in dark areas and in areas where pedestrians might come across cars. The lights adapt to human movement: going from white in the early hours to warmer colours as the day goes on.

"It ends up as a pleasant, peaceful light that doesn't pollute from a visual point of view and invites us to rest, to be calm, relaxed and ultimately to sleep," says Ángel González, Executive Chairman of SETGA.

The city has now received international acclaim for its transformation, having been named Europe's most comfortable city to live in in 2014.

Watch the video above to experience Ponteverda's transformation.