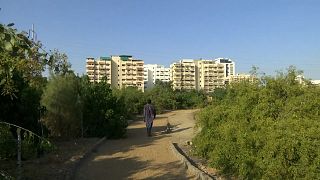 Six years ago, this patch of land in the shadow of Karachi’s high rise apartment buildings was a dilapidated park.

Transformed into a haven for wildlife, the urban forest now boasts 55 different species of plants within just over a hectare of land.

Shahzad Quereshi is the man behind this project to bring nature into the heart of the city.

“The word forest brings images of something which is very far off and is filled with animals and you know, something you have to make an effort to go to,” he says.

“You can have small patches of forest within human settlements as a very dense plantation which brings all sorts of benefits for the people living around it.”

Quereshi has a passion for biodiversity and wanted to prove that once-neglected parks could be restored using species native to the land.

"Non-native species have been tried before and they have been disastrous for the city's climate and the local climate area," he explains.

"This is only native species-based, no chemical, no pesticides, no fertilizer used in this technique".

With water supplied by two wetland channels that clean up sewage from a nearby drain, most of the trees require minimal maintenance.

An oasis in the city

Karachi is the largest city in Pakistan and often suffers from extreme heat waves. Temperatures sometimes soar to 44C leaving its 15 million residents hunting for shade.

Qureshi hopes that the urban forest will allow people to take a break, connect with nature in this concrete jungle and share the benefits of living near trees.

Scientific research has shown that walking in woodlands can help lower blood pressure, heart rates and stress hormones. All common concerns for citizens of a busy metropolitan hub like Karachi.

One local resident, teacher Fatima Hussain, is already enjoying the positive effects of a walk in the park.

“I feel this is actually what humans should be in touch with because nature is the most important part. And if we just go into concrete buildings and cut away from all the nature then there is nothing left,” she says.

Families living near the forest were among those that offered financial support alongside companies and the German and US consulates in Karachi.

The Urban Forest team say they have already created eight mini tree-filled hubs in the city and a further 2 in Lahore. Now they are hoping to spread the idea to other cities across Pakistan.

Watch the video above to learn about Karachi’s urban forest.